I just wanted to reach out and send everyone a heads-up about the new Epic macOS Fall Bundle. 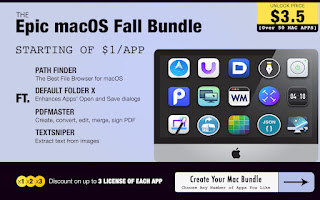 All the apps are Monterey compatible. Fully activated software is delivered immediately after order is created.
Posted by twickline at 2:40 PM No comments:

CodeWeavers CrossOver 22 for macOS Linux and ChromeOS has been released

Hi folks,
I’m thrilled to announce CodeWeavers has released CrossOver 22 for macOS, Linux and ChromeOS!
The hallmark of this release is a complete redesign of the CrossOver user interface for macOS, Linux and ChromeOS. These changes were designed with two goals in mind: both to make CrossOver more intuitive to use and to offer a more modern look and feel. We are grateful to our BetterTesters who responded to our survey and participated in our usability studies: your feedback was invaluable!
CrossOver 22 includes an update to Wine 7.7, bringing with it over 10,000 changes that offer improvements to a variety of applications. This release also includes an update to Wine Mono 7.2.0 and vkd3d 1.4.
On the macOS side, we have been continuing to make gaming performance improvements. Between including the wined3d changes available with Wine 7.7, updating to MoltenVK version 1.1.10 and adding a few other tweaks, we’ve made quite a bit of progress. One particularly exciting example is Rocket League: the performance using wined3d is much better than CrossOver 21.2, and the nameplates are visible in-game (unlike using DXVK). Our initial tests show that CrossOver 22 runs pretty well on the macOS Ventura beta. Please note that we cannot offer official support for Ventura until it is released due to the possibility of changes during beta causing problems for CrossOver support. After Ventura is released, we will post an update on our website, so make sure you are subscribed to our blog to get the latest updates on Ventura compatibility.
CrossOver 22 also offers initial support for DirectX 12 games on Linux. A handful of DirectX 12 games are running well, including Diablo II Resurrected. We also have a few fixes to Office 2016/365 bugs for our Linux and ChromeOS users.
If you use CrossOver to play GTA Online, please see this forum post with information about potential bans from Rockstar Games.
The newest CodeWeavers coupon promo code is ( CX25 ) save 25% off CrossOver Mac , Linux or ChromeOS
Posted by twickline at 10:33 AM No comments:

I’m thrilled to announce that we have released CrossOver 21.2 for macOS, Linux and Chrome OS!

This new release offers both improvements from upstream Wine and important fixes for a variety of issues.

Audio now works on both Mac and Linux for Halo: Master Chief Collection. We also fixed an issue with a recent Steam update that was causing some connections to take a very long time.

On macOS, we fixed a long-standing issue with mouse control in Unity games. We also included fixes for the latest Rockstar Games Launcher and Quicken updates that caused those applications to stop working on M1 machines.

For our Linux and Chrome OS users, we fixed rendering issues on Office 365. We also made changes so that CrossOver once again seamlessly installs on Chrome OS, and we added a fix for libldap dependency errors on certain Linux distros (including Ubuntu 21.10).

Posted by twickline at 1:47 AM No comments:

I’m thrilled to announce that we have released CrossOver 21.1 for macOS, Linux and Chrome OS!

In addition to a suite of fixes for a variety of applications, CrossOver 21.1 also includes some pretty cool enhancements. We’re very excited about them, and we hope you will be too.

Our big reveal for this release is much-awaited support for Grand Theft Auto V (including GTA Online) on both macOS and Linux. Starting with CrossOver 21.1, you can now run Grand Theft Auto V via either the standalone Rockstar Games Launcher or Steam.

This release is also the first to offer official support for the newly released macOS Monterey. We also added support for several games that previously did not run on macOS and fixed an issue for certain launchers that were not working on macOS with CrossOver 21 (including MicroTik The Dude).

On Chrome OS, resolving dependency issues should be much smoother with this release.

CrossOver 21.1 includes several other fixes, including ones for the recent updates to Ubisoft Connect and Quicken that caused problems running them in CrossOver. Additionally, this release includes improvements to wined3d and an update to Wine Mono 6.3.

Posted by twickline at 12:11 AM No comments: