vkd3d-proton version 2.7 has been released 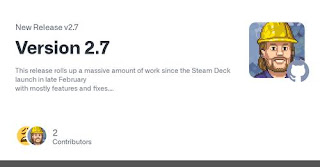 This release rolls up a massive amount of work since the Steam Deck launch in late February
with mostly features and fixes.

KHR_dynamic_rendering in particular requires Mesa 22.0 or NVIDIA 510 series, which should have
propagated to distributions a long time ago at this point.

KHR_dynamic_rendering fixes many previously unsolvable issues, but it required a rewrite,
and it was deemed impractical to support both legacy and modern paths.

v2.6 introduced support for pipeline libraries, but only for games which made correct use of the D3D12 API.
To improve the situation across the board,
vkd3d-proton now implements an internal "magic" disk cache to enable SPIR-V caching for all games.
It is possible to disable the magic cache and let applications manage the ID3D12PipelineLibrary itself if desired.

To further reduce on-disk footprint of the magic cache, we also make use of VK_EXT_shader_module_identifier
to reduce the vkd3d-proton cache by >95%, since there is no need to store actual SPIR-V data on-disk.

Mostly a lot of minor things this release.

VK_EXT_mesh_shader is required for this. Directly compatible with D3D12.

Uses VK_NV_device_generated_commands. Supported by both RADV and NVIDIA. Allows Halo Infinite to run.

Implement some missing features from DXR 1.1:

With these fixes in place, e.g. Cyberpunk 2077 DXR works. VK_KHR_raytracing_maintenance1 is required for some features.

Basic shared resources and fences are now supported when running on Proton. Allows interop with DXVK.
Special thanks to Derek Lesho (@Guy1524) for implementation.

vkd3d-proton can take advantage of HDR now, assuming the system itself supports it.

Countless bug fixes for games released since last release. Too many to enumerate individually.