There will always be apps — mostly games — whose publishers won’t port them to the Mac for financial or contractual reasons. Codeweavers’ CrossOver offers a simple, convenient way to run many of those apps. The result isn’t as reliable or universal as other solutions, but it’s a lot cheaper and easier, and with CrossOver’s helpful database of app functionality and generous try-before-you-buy period, you can see whether it’ll run the apps you want to use before you commit your hard-earned cash.

CrossOver translates Windows commands into Mac ones on the fly — like hiring an interpreter to help you in a foreign country, rather than learning the language yourself. It’s based on the open-source WINE project, but its improvements to standard WINE make it a lot easier for everyday users to successfully run.

CrossOver 22 is only available from Codeweavers' web site. $74 gets you a full copy and a year’s worth of updates to the app. Once that period elapses, you can still use the copy you already have as long as you want to, but you won’t be able to download fresh updates. You'll have a limited window of time after your subscription expires to renew it for roughly $30.

You can also pay $494 for CrossOver Life, which removes the need for annual renewals. The company tends to offer once-a-year discounts around Black Friday, sometimes slashing the cost of a year's updates to as little as $15.

After a quick installation, CrossOver does most of the hard work for you. It sets up a “bottle” — a contained virtual environment — in which you can install basic Windows or Linux underpinnings, plus any apps you’d care to run. CrossOver builds in shortcuts to install popular apps like Steam, and it can seamlessly install apps from the Internet, from downloaded ISO files, or from a physical disc, should you have an external drive.

You can have multiple separate bottles for different apps, or put all the apps you use in a single vessel. As with containerized software setups like Docker, this makes CrossOver easier and less stressful to use. In the unlikely event that something goes horribly wrong inside a bottle, it won’t affect your larger system. You can just delete the bottle and start fresh.

Each new version of CrossOver offers under-the-hood improvements to help all apps in general and specific titles in particular run better. But CrossOver 22’s biggest leap forward lies in its overhauled interface.

Codeweavers’ database of popular apps and their compatibility, maintained by volunteer testers, is now more directly integrated into the app itself, rather than requiring a separate visit to Codeweavers's web site. That database isn’t comprehensive — some titles I’ve personally used under CrossOver aren’t included — but it’s a good place to start when you’re curious about whether a particular app will run there.

The path between original Windows code and successful Mac execution isn’t always straight. For instance, Windows games use a set of tools known as DirectX to enable 3D graphics. CrossOver has to pass those commands through an open-source translator called DXVK, which maps them to the open-source Vulkan 3D standard. These Vulkan commands must then go through another interpreter, MoltenVK, to run under Apple’s own 3D toolkit, Metal.  Each of these handoffs eats up processing power and makes the resulting games run slower and less reliably than they would if coded for the Mac from the get-go.

The beefier your processing power, the better performance you’ll get from CrossOver. Even though it’s an Intel native app, it runs best on Apple silicon under Rosetta 2 emulation, thanks to the sheer horsepower of the M1 and higher.  (CrossOver plans to eventually support Apple silicon, but Codeweavers says that transition is likely years away.)  Popular launcher apps like Steam, and simpler 2D games like Guacamelee, ran without a hitch in my tests, but more sophisticated titles had various degrees of tradeoffs.

When I ran 2017’s Star Wars: Battlefront II on my stock M1 Mac Mini, the game looked great. But depending on the game mode and the size and type of the environments I found myself in, performance ranged from fast and fluid to an unplayable crawl. I’ve seen YouTube videos of other CrossOver users playing the game much more smoothly, even on levels that choked my computer. If you want to game with CrossOver, having more than 8GB RAM or something more powerful than a basic M1 will likely serve you well.

Furthermore, Metal has different aims and priorities than DirectX, trading some measure of tech sophistication for the ability to run across MacOS, iOS, and tvOS. Even under Apple’s recently announced Metal 3, there are just some things DirectX does for which Metal lacks an easily translated equivalent.

I saw this firsthand playing Jedi: Fallen Order. Though the game mostly ran smoothly barring some pauses for loading, the world around my protagonist didn’t render right, presenting a mass of flickering black triangles instead of realistic surroundings. I was able to adapt and still enjoy the game, but if you’re looking for absolute fidelity, consider this fair warning.

And even if everything else goes swimmingly, there are some facets of Windows software that just won’t work outside that platform, no matter what. Barring some miracle in a future version, I’ll never know how well Star Wars: Squadrons runs on CrossOver, because the anti-cheating software for its multiplayer mode won’t cooperate, shutting down every attempt to install the game.

Both apps are Apple Silicon native and can, with various degrees of workarounds, run Apple Silicon-friendly ARM-based versions of Windows 11 (and their apps) natively. CrossOver tops out at apps for Windows 10, and because of the engineering complexities involved, Codeweavers says it won't offer a native Apple Silicon version for several more years.

But Parallels and VMWare each cost more than a year of CrossOver updates, and neither will work without a copy of Windows itself. Even an older version of that can run you as much as $140.

CrossOver 22 is impressive in its simplicity — at least in terms of how easy it is to get select Windows applications up and running on macOS. It's by no means perfect, and your mileage will vary dramatically depending on the complexity of the applications you're looking to run, not to mention the power of your Mac computer itself. But with prudent use of the free trial to test your must-work apps, it's a great opportunity to bridge the gap between Apple and Microsoft's computing worlds.

Posted by twickline at 10:22 PM No comments:

DXVK version 2.1 has been released with HDR support 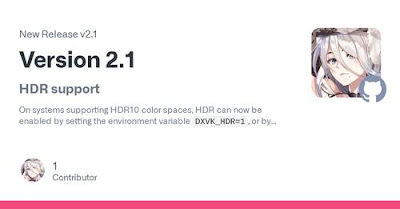 No major Linux desktop environment currently supports HDR. In order to use this on Linux, a Gamescope session with --hdr-enabled is required. This is currently only supported under AMDGPU and requires kernel patches from the josh-hdr-colorimetry branch.

Note: D3D11 support is implemented, but not expected to work in most games as they typically require AMDAGS or NVAPI to set up HDR output, rather than using the corresponding DXGI APIs. Additionally, only Nvidia drivers are expected to work on Windows.

Use of pipeline libraries was extended to pipelines with tessellation or geometry shaders in order to further reduce stutter. Additionally, more features of the VK_EXT_extended_dynamic_state3 extension are leveraged to reduce stutter in some situations when MSAA is used, provided that the Vulkan driver supports them.

Note: Current development builds of RADV will expose VK_EXT_graphics_pipeline_library with the features that DXVK needs if the RADV_PERFTEST=gpl environment variable is set. Note that the implementation is not yet complete and does not support shader caching at this time, but it should generally work with DXVK.

Note: Games that resolve the rendered images inadequately (e.g. performing a linear resolve on HDR render targets) will likely not benefit from this option.

For native Linux builds of DXVK, a GLFW backend was added as a compile-time alternative to the existing SDL2 backend. See PR #3111 for details.

Note: The setup script setup_dxvk.sh was no longer deemed useful and got removed. This change will only affect users who manually install DXVK into a wine prefix, rather than using it through Proton or Lutris.

Note: Due to changes to our DXGI implementation, older versions of vkd3d-proton (prior to 2.8) will no longer work with this version of DXVK.

Run Microsoft Windows Applications and Games on Mac, Linux or ChromeOS save up to 20% off  CodeWeavers CrossOver+ today.
Posted by twickline at 1:16 PM No comments:

The Wine team is proud to announce that the stable release Wine 8.0 is now available.

This release represents a year of development effort and over 8,600 individual changes. It contains a large number of improvements that are listed in the release notes below. The main achievement is the completion of the conversion to PE format.

Posted by twickline at 1:45 AM No comments:

The Wine development release 8.0-rc5 is now available. This is expected to be the last release candidate before the final 8.0.

Posted by twickline at 12:18 PM No comments:

Posted by twickline at 8:30 AM No comments:

Posted by twickline at 7:53 PM No comments: