Steven Edwards of the Bordeaux Technology Group released Bordeaux 1.6 today. Bordeaux 1.6 comes with added support for Google's Chrome Web Browser, Google Earth, Google Picasa, Trillian and Apple's Safari Web Browser. Additionally, Cellar support has improved; you can now delete and install into an existing Cellar. IE6 now installs java, shockwave and latest flash. There has also been many small bug fixes and tweaks on the backend to improve the speed and reliablity of all the supported applications.

The cost of Bordeaux 1.6 is $20.00. Anyone who has purchased Bordeaux in the past six months is entitled to a free upgrade. Bordeaux comes with six months of upgrades and support and of course a 30-day money back guarantee.

The Bordeaux Technology Group is a software services and development company specializing in Windows compatibility software. Users of Linux systems from time to time find themselves in the need to run specialized Windows software. The Bordeaux suite enables access to these programs and data in a seamless and low cost manner without requiring licensing of Microsoft Technology. The Bordeaux Group also provides migration services and support for alternative operating systems specializing in Windows compatibility.

There is a multitude of software developed only for the Windows operating system and even when software vendors port thier applications to another platform, generally it lacks features that the Windows version contains. The only solution these developers face is to have access to both systems for testing which leads to increased infrastructure demands, and wasted project resources. If you are vendor interested in supporting your application on Linux or a software user that needs to run a Windows application on Linux, we can help.

Fixed broken winetricks download locations
Posted by twickline at 7:22 AM No comments:

Shouting 'Free' In a Crowded Internet

Last spring, I was frustrated, because it seemed like many Mac users were not aware of CrossOver Mac. CrossOver is so much faster and easier to try than any of the other alternatives, it seems a crime to me that every Mac user doesn't try it first. It's not always the perfect solution, but when it works, it is very sweet.

However, since we believe in Free Software, and provide all of our core work to the free Wine Project, we're not exactly rolling in the marketing dough. So we had lunch with our PR firm to see what we could do with a bit of creativity. We had a lot of ideas, and this scheme of doing a Lameduck Challenge came up just as I had to leave the meeting. The idea was we'd give our software away for free if George Bush could accomplish any of a range of fairly challenging goals.

I circle back later, and discover that our COO and Republican VP of Sales has decided it's a winner, and we're going ahead with it. I had some reservations; I love to make light hearted jokes, but I was not interested in denigrating the office of the President or in offending a lot of Republicans. But after being reassured that a survey of Republicans and Independents did not turn up anyone deeply offended, we pressed ahead.

We announced it with great fanfare...and watched it sink into nowhere. No pickup, no interest, no buzz; a marketing gimmick that no one cared about. We did some follow up work on it, had some fun with it, but again, we got little or no interest.

And then we had the financial market meltdown. Followed by the radical tightening of belts everywhere and plummeting gas prices. Suddenly what had seemed improbable happened - gas cost less now than it did a year ago.

Now we had a choice - no one but a few people had noticed (see 'sunk like a stone', above). We could just pretend it never happened.

But what the heck, a promise is a promise. Besides, no one cared with the first round, so who was going to pay attention this time? We'd give away 10,000 copies maybe, 50,000 tops.

Oh, how wrong we were.

I think that Andrew Lavallee expressed it best in his post on it: CodeWeavers is learning what happens when you scream “Free Software” in a crowded Internet.

So we announced it on Monday, October 27th. We had tested out our system for giving away the software the previous week; we have a rich experience that went through the whole process, got the customer an account and a support entitlement, the whole nine yards. Late Monday night we cut over live to giving away the software, just to shake out the bugs. (It was supposed to start at midnight, Central Time, we actually cut over at about 10:00 pm, 2 hours early).

Our first sign of trouble was that the server load shot up through the roof right then on Monday night. It would not recover for several days. Jeremy Newman worked with it that entire night; we kept tuning and optimizing the whole way, pruning parts of our rich experience down. Each time we'd handle a new jump in the load, we'd get slammed even harder. What was fantastic about it was that the traffic was coming from all over - we were reaching people all across the world, in all different walks of life.

I woke up at 6:30 and checked in with Jer, just as things started to really head south. The last straw came when both Slashdot and Digg picked up on the story; our server simply could not keep up. All of our tuning and trimming and slimming down to a bare bones rich web site just wasn't getting it done.

Posted by twickline at 9:41 PM No comments:

This guide shows how you can use CrossOver Linux Pro 7.1.0 to run Windows applications on Ubuntu 8.10. CrossOver is based on Wine. It is not available for free, but maybe you are one of the lucky guys that grabbed a CrossOver copy for free a few days ago; otherwise you can install a 30-day trial version to test it.
This document comes without warranty of any kind! I do not issue any guarantee that this will work for you!

Visit the Codeweavers web site and grab a trial version, or log in to your existing Codeweavers account. There's a CrossOver Pro .deb package available for Debian and Ubuntu systems - download that one to your hard drive (e.g. /home/falko/Desktop). The Open with GDebi Package Installer (default) option does not work here for some strange reason, it gives back an error. 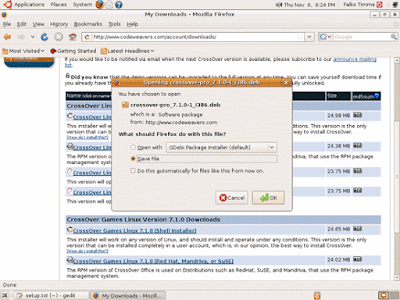 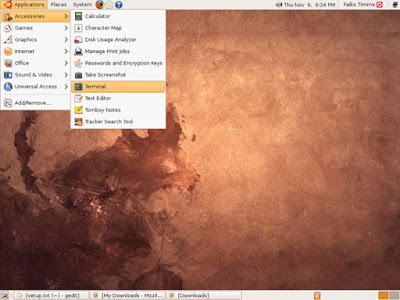 ... and go to the directory where you've saved CrossOver Pro:

cd /home/falko/Desktop/
You can install it with the following command: 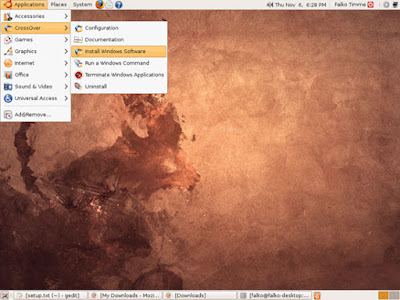 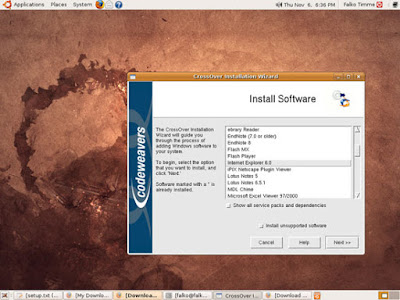 Posted by twickline at 7:16 AM No comments: