DXVK version 2.0 has been released with improved driver compatibility

A Vulkan 1.3 capable driver and wine version are required to run this version of DXVK. See the driver support page for details.

Many features in this release, especially the shader compilation changes detailed below, require the use of modern Vulkan features, such as Dynamic Rendering, Extended Dynamic State, and Null Descriptors. Due to the significant changes required to make use of them, it was no longer practical to maintain and test code paths for older drivers which do not support these features. 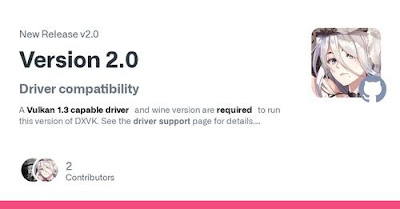 In practice, any system capable of running D3D11 and D3D12 games using Proton Experimental right now will be able to run DXVK 2.0.

Note: Third-party Vulkan layers that were not updated for Vulkan 1.3 will no longer work.

In order to reduce the likelihood of running out of address space in 32-bit D3D9 games, DXVK will now use memory-mapped files to store shadow copies of textures. This allows us to unmap memory that is not being used by the game, thus freeing up significant amounts of address space, up to several hundred Megabytes. See PR #2663 for implementation details.

Note: This change does not affect 64-bit games since address space is not a concern there. It also does not affect D3D10 or D3D11 since resource uploads work differently in those APIs and are much more memory efficient.

On drivers which support VK_EXT_attachment_feedback_loop_layout, reading from an active render target in D3D9 games is now properly supported, which previously caused rendering artifacts on newer AMD hardware and required driver-level workarounds. This affects a number of games, including GTA IV.

The D3D9 alpha test implementation was changed to more closely match the behaviour of Nvidia's implementation, which fixes inaccuracies in various games. The d3d9.alphaTestWiggleRoom option was removed, and games that previously required this option should now work correctly by default.

DXVK previously shipped incomplete implementations of d3d10.dll and d3d10_1.dll, but has not installed them by default since Version 1.6 since wine's implementation provides more features that are needed for D3D10 games to run, including the D3D10 Effects framework.

Since our implementation is incomplete and has not been used by Proton or Lutris for a very long time, DXVK will no longer ship these DLLs starting with this release. The D3D10 API itself is still supported via d3d10core.dll.

While no games are known to use these features directly in D3D11, some games and game launchers rely on feature support being consistent between D3D11 and D3D12 in order to allow users to enable D3D12 in the game options. While our implementation of these feature is generally functional, there may be bugs or performance issues in case a game does use them.

Note: Intel's ANV driver currently does not support the corresponding Vulkan features and is therefore limited to feature level 11_1. This applies to both DXVK and vkd3d-proton.

The implementations of ID3D11DeviceContext were refactored so that immediate contexts and deferred contexts no longer use common entry points. This is closer to Windows behaviour and may improve compatibility to third-party libraries and mods that hook into the D3D11 immediate context specifically, and reduces CPU overhead since some frequently used code paths are now more specialized for each context type.

On drivers which support VK_EXT_graphics_pipeline_library, including the IndependentInterpolationDecoration feature, Vulkan shaders will now be compiled at the time the game loads its D3D shaders, rather than at draw time. This reduces or eliminates shader compile stutter in many games.

In games that load their shaders during loading screens or in the menu, this can lead to prolonged periods of very high CPU utilization, especially on weaker CPUs. For affected games it is recommended to wait for shader compilation to finish before starting the game to avoid stutter and low performance. Shader compiler activity can be monitored with DXVK_HUD=compiler.

Note: The relevant Vulkan features are currently only supported by Nvidia drivers (version 520.56.06 or later). Driver support is expected to improve in the future.

Note: State cache files created with DXVK versions prior to 1.4.3 can no longer be used.

Note: Despite our efforts, due to the significant changes under the hood, there may be issues when using an older state cache file under some circumstances. If you experience crashes, please test if the game runs with a clean cache file (DXVK_STATE_CACHE=reset) before reporting a bug.

Work from dxvk-native has been upstreamed in order to facilitate native Linux builds of DXVK, which can be used as a drop-in replacement to port D3D applications without having to change rendering code.

Note: When porting a D3D11 application, please refer to the Feature support and Developer Guidelines pages on the Wiki to avoid hitting unsupported or slow code paths in DXVK.

As part of cleaning up the repository, test applications that were of limited usefulness, as well as our custom d3dcompiler frontends, have been moved to the new dxvk-tests repository.

Vulkan and SPIR-V headers are now pulled in as submodules from the original repositories. This changes how the repository needs to be cloned and updated, or otherwise building DXVK will fail:

The project wiki was also updated and expanded to be more useful.

Special thanks to @Blisto91 for doing a significant amount of testing during development.

Posted by twickline at 1:21 PM