vkd3d-proton version 2.8 has been released 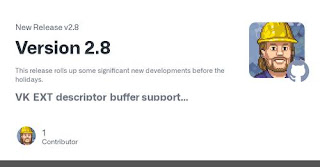 This release rolls up some significant new developments before the holidays.

This extension is significant in that it removes a ton of CPU overhead.
We already had most of this in place on RADV and Steam Deck,
but this will allow NVIDIA, Intel, Turnip, and other AMD driver implementations to hit the same optimal code paths.
GPU bound performance increases slightly since we can also remove some shader code that was required to workaround lack of descriptor buffers.

The entire API feature was rewritten from scratch to support more implementations and edge cases without
a lot of per-application hacks and workarounds.
As the most extreme example of weird API usage, Guardians of the Galaxy should (finally) run well on NVIDIA.

To most users, this change should be transparent.

NOTE: The old swapchain implementation is still in the repository, and is expected to be removed in the next release.
For now, VKD3D_CONFIG=swapchain_legacy can be used to triage any potential issues with the new one.

NOTE: A driver crash was observed on NVIDIA 525.x drivers when running in some PRIME configurations.
For now, we disable use of present_wait on these drivers.

An obscure feature was stubbed out and forgotten until now.
ID3D12Device1::SetEventOnMultipleFenceCompletion() is now implemented.

Run Microsoft Windows Applications and Games on Mac, Linux or ChromeOS save up to 20% off  CodeWeavers CrossOver+ today.
Posted by twickline at 9:44 AM