Status update for Microsoft Office 2013 on Linux with CodeWeavers CrossOver

Back on November 12th 2015 I posted about Microsoft Office 2013 running on Linux with CodeWeavers upcoming CrossOver 15 release. Unfortunately, I got a little ahead of myself and thought Office 2013 would be supported by now. But due to the complexity of supporting such a large piece of software like a office suite it's taken a little longer then what I expected.

Here is a quick overview of Microsoft Office 2013 status on Linux once again.


So, What has changed sense November 2015? Office 2013 can now log into MSN and download templates just like on Windows. DirectWrite has also seen many improvements over the past six months. It looks like most of the UI bugs have been fixed now. The installation and overall stability will have improved and I would hazard to say the registration has improved.

Carom Wills the Quality Assurance representative at CodeWeavers posted a few days back a screen-shot of Word 2013 logged into MSN, just look at the top right corner and you will see Cody Weaver as the user.


Word 2013 on Linux with CrossOver 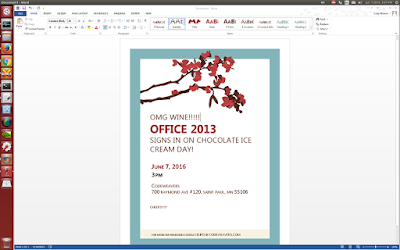 MacOS and Windows software bundles, save up to 90% off the normal retail price only at BundleHunt.
Posted by twickline at 3:16 AM