An introduction to CrossOver Games

What exactly is CrossOver Games

CrossOver Games is a commercial variant of Wine released by CodeWeavers with support for many of today's most popular games. CrossOver Games is tested for performance and stability with many games such as Guild Wars, Eve Online, and Steam games like Half-Life 2 and Portal.
Minimum system requirements

The demo version of CrossOver has all the functions and features of the full version. Any Windows software that works on a full version will also run in the demo version, and vice versa. The important limitation of the demo version is that bottles can only be used for 7 days. This means that any Windows packages that you install using the demo version will cease to work 7 days after their installation. When a demo installation is unlocked, all existing bottles and applications are unlocked as well. To unlock a demo, you must have a support account with CodeWeavers. You can purchase CrossOver licenses and support contracts from the vendor that provided you with your demo or directly from the CodeWeavers store. During purchase you will be asked to provide an email address and password. This address and password will be used to unlock your demo install.

Many games that are not on the Supported list will still work just fine. For a list of such applications, visit the CodeWeavers CrossOver Compatibility Center. At the compatibility center you can search for games, read about other users' experiences, and post tips and hints for other users.

Cost and Support of CrossOver Games

If your a current owner of CrossOver Office you will receive a complimentary copy of CrossOver Games. If by chance you don't currently own a copy of CrossOver Office you can purchase the stand alone Games product for only $39.95 with your purchase you will receive six months of professional support through their support ticket system, you can join in the discussions that take place at the C4 compatibility center, join a mailing list, vote for your favorite game, and much more.

A purchase also goes toward helping support a full time Wine hacker! the folks at CodeWeavers have over the years given back well over 98% of all the code modifications that went into CrossOver to the Wine project. 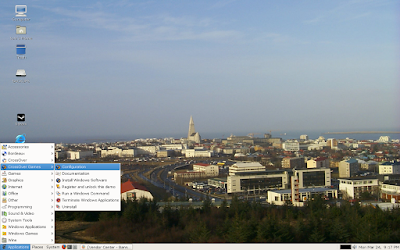 When you select "Configuration" from the menu "CrossOver Games Setup" the setup tool will start. 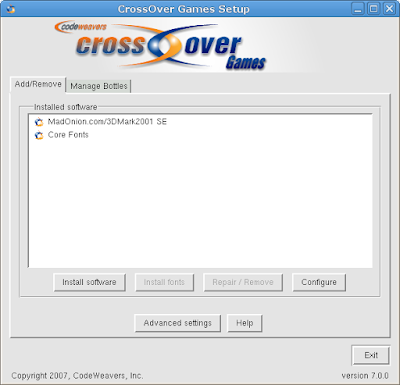 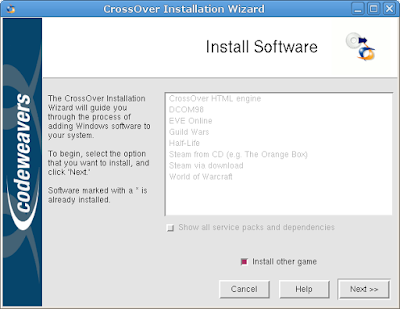 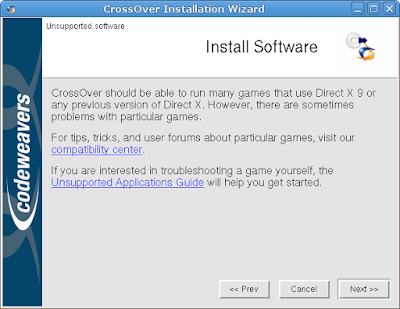 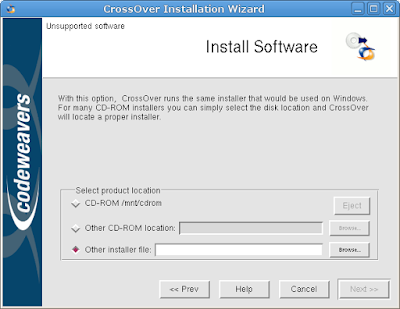 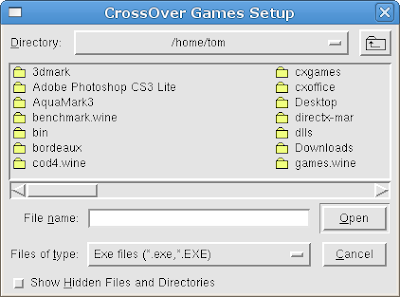 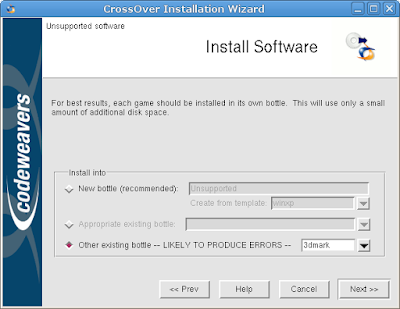 After the install has finished your application or game will be placed in the Add/Remove software window. 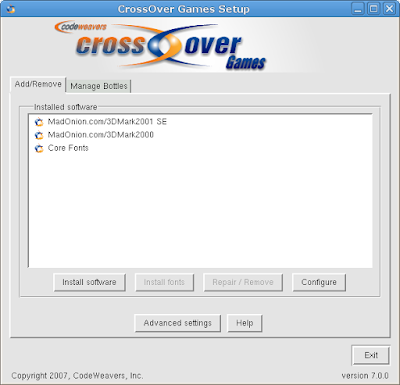 In the Add/Remove tab you will see "Advanced Settings" 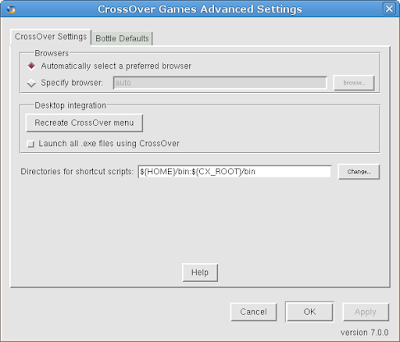 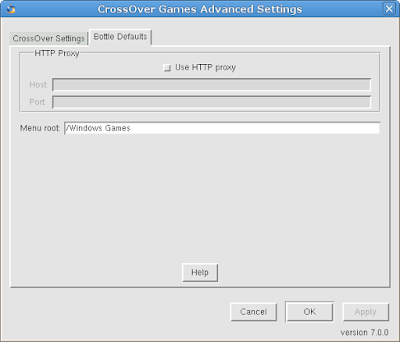 If you want to manage a bottle select the "Manage Bottles" tab and proceed. 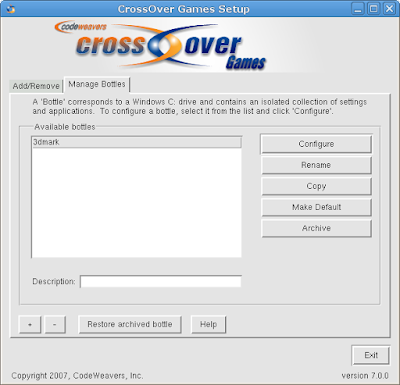 Here is some screenshots of the "Manage Bottles" tab, this is where you configure CrossOver Games to your desired liking. 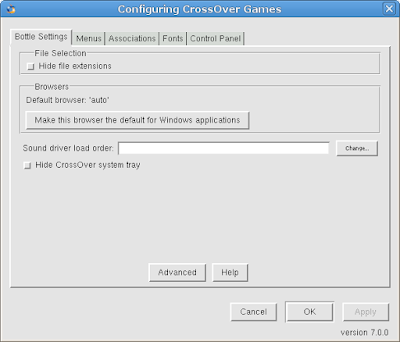 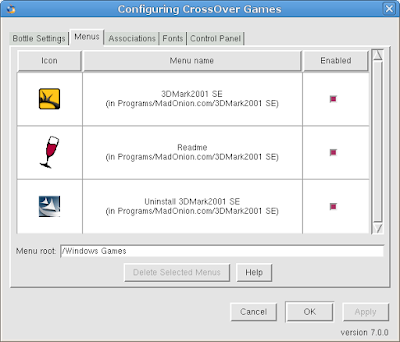 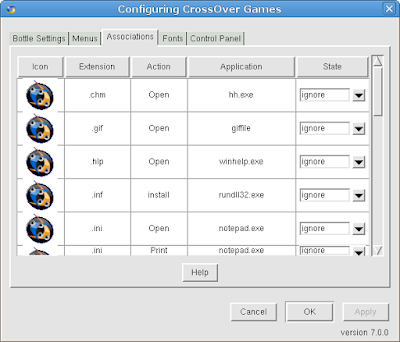 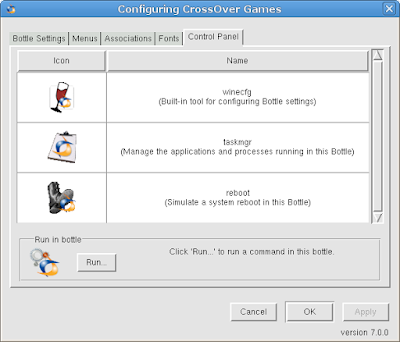 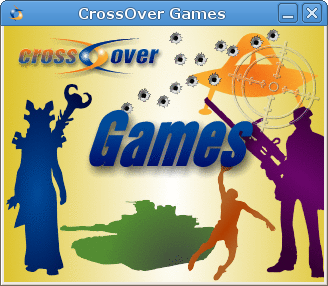 To register your copy of CrossOver Games select the "Register and unlock this demo" from the system menu. You will need to enter your email address and password and the register tool will conect to the CrossOver store and proceed with the registration.

To uninstall CrossOver Games select "Uninstall" from the system menu. You can choose to leave all of your previously configured bottles intact if you wish to do so.

To run a Windows game from the system menu select "Windows Games" and simply navigate to the menu entry and choose the installed game. 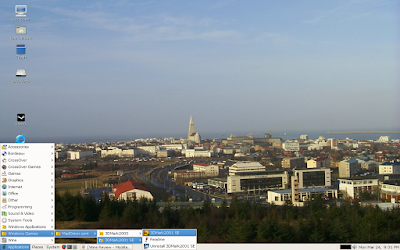 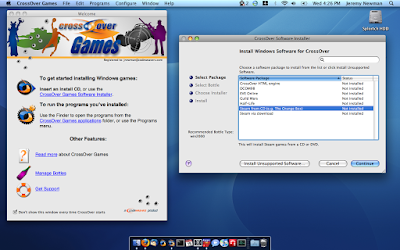 In our next post we will be doing a review of Steam, Half-Life and Half-Life 2 via the Steam install in CrossOver Games.

I'd like to see how this compares to say Cedega. In Cedega I have managed to install and play BF2142 with some success.

I don't really see the benefits to be gained from this versus Cedega, can someone enlighten me please?

We feel that our support for many technologies, particularly DirectX, has surpassed that of Cedega. This is because, unlike Transgaming, we return all our work to the Wine Project, and as a result we are able to take in all of free Wine's work as well. As a result, we think that our games support is pulling ahead of Cedega, and is only going to get better. That may not always be true, and it will vary from game to game, but broadly speaking we feel that that's the trend.

I don't really get the payment system for this software. If I buy a version of Crossover Games right now, and, for example, a new version comes out after 13 months, will I still be able to update my version?
Because the part I don't get is that you don't get support after 12 months... What kind of support do you mean? Regular updates or something like email/forum support?

Thank in advance for the help! ;)

You get updates, email and forum support for 12 months.

It is very interesting for me to read the article. Thanx for it. I like such topics and anything that is connected to them. I definitely want to read more soon.