vkd3d-proton version 2.5 has been released 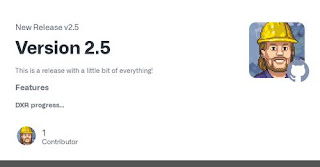 This is a release with a little bit of everything!

DXR has seen significant work in the background.

Some new DXR games are starting to come alive, especially with DXR 1.1 enabled,
but there are significant bugs as well that we currently cannot easily debug.
Some experimental results on NVIDIA:

It's worth experimenting with these and others.
DXR is incredibly complicated, so expect bugs.
From here, DXR support is mostly a case of stamping out issues one by one.

A fair bit of work went into DXIL translation support to catch up with native drivers.

Resizable BAR can improve GPU performance about 10-15% in the best case, depends a lot on the game.
Horizon Zero Dawn and Death Stranding in particular improve massively with this change.

By default, vkd3d-proton will now take advantage of PCI-e BAR memory types through heuristics
as D3D12 does not expose direct support for resizable BAR, and native D3D12 drivers are known to use heuristics as well.
Without resizable BAR enabled in BIOS/vBIOS, we only get 256 MiB which can help performance,
but many games will improve performance even more
when we are allowed to use more than that.
There is an upper limit for how much VRAM is dedicated to this purpose.
We also added VKD3D_CONFIG=no_upload_hvv to disable all uses of PCI-e BAR memory.

MacOS and Windows software bundles, save up to 90% off the normal retail price only at BundleHunt.
Posted by twickline at 10:30 AM