News article from Tux Radar:
We posted yesterday about Firefox having very different JavaScript performance on Windows and Linux, despite being the same version of the software.
Some people have said that we should have used a stock build from Mozilla. (We disagree, because we'd argue that most Linux users use software from their package manager rather than downloading bits and pieces from the web.) Others have said that Opera should be tested. And some people have said that it's Nvidia/AMD/Intel drivers that are slowing down Linux.
Anyway, we thought we would conduct a couple more quick benchmarks to see whether we can eliminate some of these variants. We don't have time to run the full benchmark suite and fiddle around from scratch, so we ran just a few quick tests to see what we could find.
This time the information you need to know is:
To be absolutely clear: we took the Windows Firefox and ran it on Fedora Linux using Wine 1.1.12 as provided by Fedora:
With all that in mind, here's how the results look now: 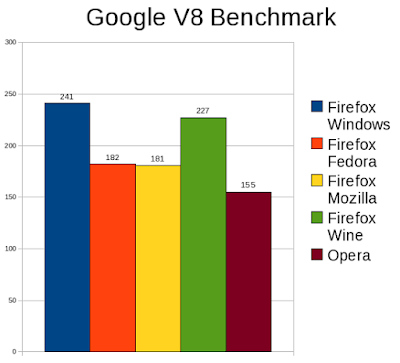 The end result: Firefox from Mozilla or from Fedora has almost nil speed difference, and Firefox running on Wine is faster than native Firefox. Opera lags behind, but we're inclined to believe that number would increase if a better build was used.

Posted by twickline at 3:34 PM