Here is a FAQ about Putty for Mac it should help answer the most common questions and support request.

(Q) What is Putty for Mac?
(A) Putty is one of the Best Terminal Emulators available today. It Supports different types of Network Protocols such as SSH, FTP, SCP, Telnet etc. In Windows it is used as SSH Client to connect to Your Linux server or for some other purpose But what will you do if you are on Mac? You might be thinking , Is there any Software like Putty for Mac Available? The answer is Yes! With the help of some other Software's we can Use putty on Mac although Putty is used widely on Windows Platform. Official Versions of Putty are available on Unix like Platforms, and now it's widely available for Mac systems running OSX 10.11 or higher. Please see the FAQ entry about running Putty on OSX 10.8, 10.9 and 10.10 below.

(Q) I get this error when installing ( Error : LaunchServices: Could not store lsd-identifiers file at /private/var/db/lsd/com.apple.lsdschemes.plist ) is this a Putty error / bug?
(A) No, it's a Mac OS X bug :) See : https://discussions.apple.com/thread/7270354?tstart=0

(Q) How do I expand the Putty window it is very small by default? 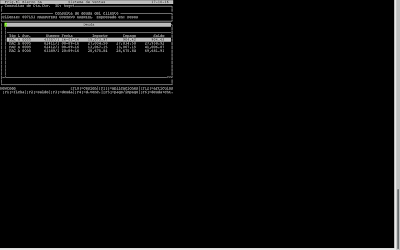 (A)  Unfortunately at this time, Putty for Mac does not support resizing an established connection.

What you can do is create another session for your application and set a custom Window size for it by changing the Columns and Rows and then save that for future usage of that application.

I know it is not optimal and hopefully we will be able to support resizing sometime in the future. 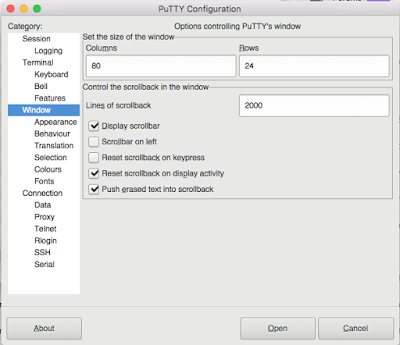 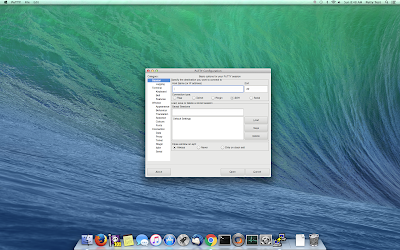 (Q) I downloaded and installed Putty but I get a security warning when trying to run it, what's up?
(A) If you try to open an app that is not registered with Apple by an identified developer you get a warning dialog. This doesn’t necessarily mean that something’s wrong with the app. For example, some apps were written before developer ID registration began.


To override your security settings and open the app anyway:
Note:   Another way to grant an exception for a blocked app is to click the “Open Anyway” button on the Security pane of System Preferences. This button is available for about an hour after you try to open the app. To open this pane, choose Apple menu > System Preferences, then click Security & Privacy. 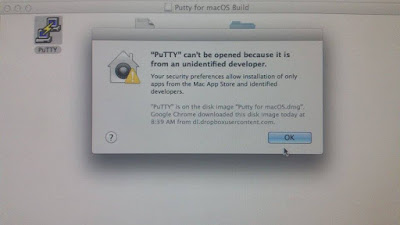 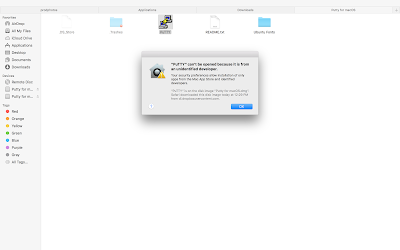 Follow the above instructions and Putty should run as expected.

UPDATE 5/8/17 When version 8.0 is released it will be signed by Apple as a known application developed by a known developer. This entry will then be removed as it will no longer be relevant.

(Q) Where are the support forums?
(A) Coming Soon!

(Q) Can I get a free trail version?
(A) Sorry but we don't have a trial version at this time, by our 8.5 release we plan to have a fully functional demo / trial version available.

(Q) Do you have volume or educational discounts?
(A) Yes, we currently have volume discounts available that max out at 50% off the normal retail price, see this post for more details.

Posted by twickline at 3:11 AM