PlayOnLinux 5 : We want your opinion!

Edit: apparently there are some people that do not want to play the game and decided to flood the poll. Fair enough. The poll is now closed. Please comment instead.

Hi everybody!
As some of you have heard about it, we are seriously thinking about the future version of PlayOnLinux (a.k.a. PlayOnLinux 5.  The version 4 has a long history and the code contains stuff that makes it very hard to maintain. We really need to have a more stable version if we want to continue to give you the best. If we continue working on PlayOnLinux v4 we are assuming that:
In this piece of news, I'm going to explain the option we prefer, why are we prefering it and also we are going to ask you if you agree or not.

Please read the whole article before complaining, trolling. It is a really important topic! Once you have read everything and you understand the problem, fell free to send comments and to vote.

As many of you may have heard, we are seriously thinking about switching from Python to Java. I perfectly understand some concerns and to be honest, I was the first to criticize Java even few months ago.
However there are several reasons that let us think that Java is the right choice for us:
PlayOnLinux is a lot more complex than just a GUI for wine. It is mainly a set of tools allowing you to write very powerful scripts. That is why it is a little more complicated than just a GUI for wine.


Responses to the main concerns


PlayOnLinux will become very slow because Java is very slow

I can ensure you that this is wrong.
Java is a lot faster than Python in general (http://benchmarksgame.alioth.debian.org/u64q/python.html). Moreover, the v4 branch has a lot of non optimal code. The tests we have already done with Java is showing us than what we have developed so fare behave a lot faster that PlayOnLinux 4. To be honest, there is only one drawback: the JVM takes a little more time to start than the python interpreter.


You should have used QT! That makes more sense.

You may be right, but I'm talking about the language here, not about the graphical interface. So far, we've started to work with OpenJFX:
Drawbacks
However, the design of PlayOnLinux v5 perfectly allows to implement several user interface and let users chose the one they want. So it is perfectly possible to implement a QT interface with QTJambi for example: http://en.wikipedia.org/wiki/Qt_Jambi. (But it is not a priority. A command line interface is more important)


Java applications are ugly, not integrated to the system.

You may be talking about Swing. In our case, we are planning to use different interfaces that look a lot better.


Java is insecure, there are so many security patches

The reason for that is that Java also has a "sandbox" mod which is often used to allow browser to execute some Java code without the approval of the user. We do not want to run PlayOnLinux on your web browser, so that's fine if you disable your browser plugin.

Proposal of a new design

A image is better to start. We plan to replace bash script with python scripts. 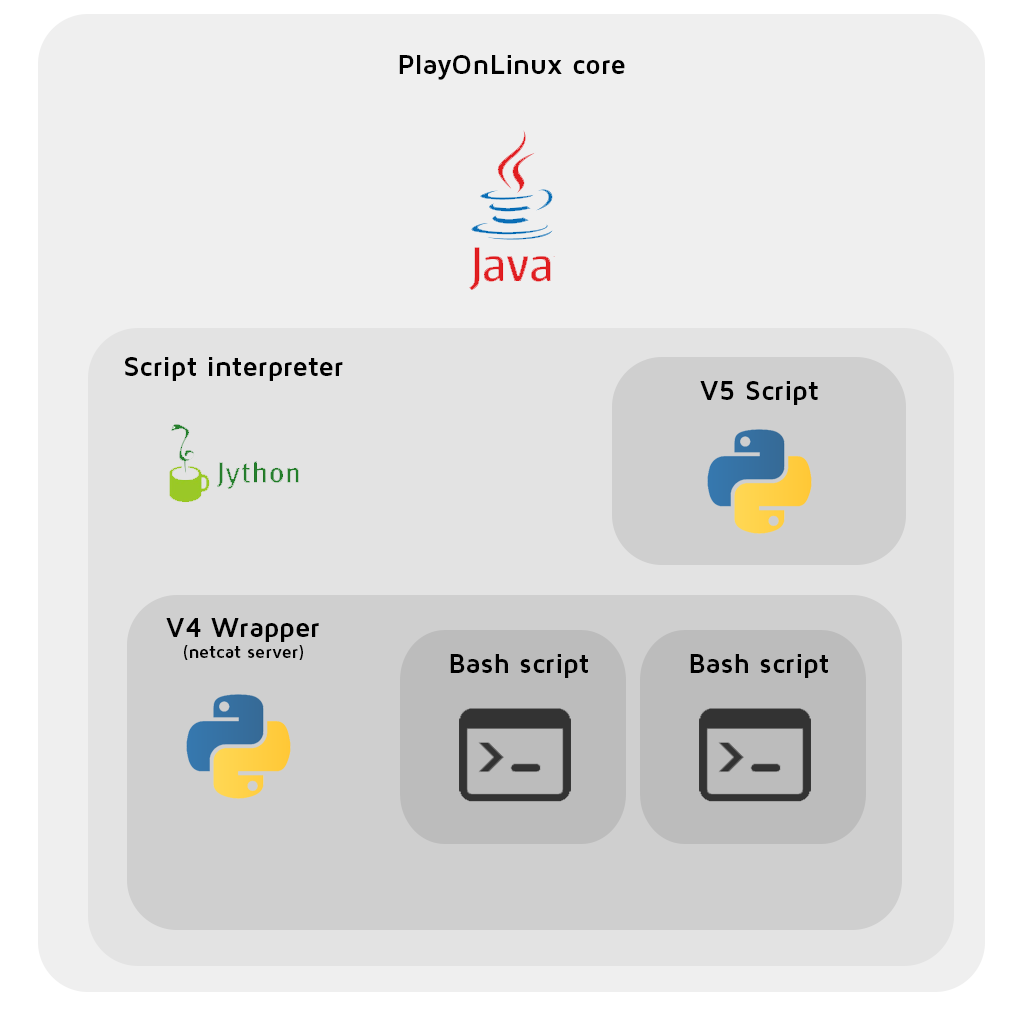 So you plan to run Wine inside Bash inside python inside Java :-O.

Of course not, that is where Jython comes. Jython is not using your system python at all! In fact it is a library that compile your python code into Java class on runtime. Basically, it means than it can just run your python script directly on the Java Virtual Machine without depending on Python. In fact, there will be less layer than there are today because the scripts will be able to execute Java codes directly without needing to create any sockets or other stuff like that.

Tasks that have already been done so far

We have set up two tools:

We have developed the following component as a proof of concept. If you agree with us, we are going to continue on that way to be able to propose you the best version of PlayOnLinux in the next few months.

So far, I'm pretty confident that this version can perform a lot better than v4.
However, I want to have your opinion about this choice. Please send the most comment as you can and talk freely. Please provide arguments with your commentary so that we can progress.


Now the time has come to vote!

MacOS and Windows software bundles, save up to 90% off the normal retail price only at BundleHunt.
Posted by twickline at 6:49 PM