I thought this would once again be a good time for us to share our next six months outlook for Bordeaux. Maybe I should start with whats taken place over the past few months then go over our future goals.

Over the past six months it has been extremely exciting times around here once again, we shipped Bordeaux for MAC users and now MAC users can run Microsoft Office, Internet Explorer 7 and many other Windows applications on their beloved MAC Computers. So, now its easy and inexpensive for MAC users to run Microsoft Windows Applications and Games without having to run bootcamp and a full version of Windows.

We also refreshed Bordeaux for BSD and Linux five times this year, and added support for Mozilla FireFox, Apple Safari, Google SketchUp, VLC Multimedia player and updated to the latest IrfanView release. Bundled Wine 1.2.0, added support for Pulse Audio, updated and cleaned up our custom winetricks script and we also fixed a number of bugs and tweaked the install scripts for cleaner installs.

We are currently running a donations promotion, where we will give fifty percent of all sales back to the Wine and FreeBSD community's. For more information of the fifty perfect give back promotion please take a look here.

In the next few months, we plan to ship Bordeaux 3.0.0 and this is where 99% of our work will be focused. In the past Bordeaux was a run of the mill "Wine front end" and while their is nothing wrong with being just a front end to Wine this approach causes massive head aches. Wine is released every two weeks and over just a couple months their are numerous versions that need to be supported. Some people stick with the old stable Wine 1.0.1 version that came with their distribution while others install the latest version just after each release. And if you have used Wine for more then a month you know that what worked in one release isnt guaranteed to work in the next release.

So it came to the point to where we needed to also Bundle Wine with Bordeaux. And as of our 2.0.0 release we now bundle our own Wine build with each release. This allows us to focus on one version and test all of our supported applications against it. And now we don't have to worry about the next Wine release breaking a application or feature. This move has also opened up the availability for us to add in hacks and tweaks so certain applications and games run, or in some circumstances run allot better then with just plain stock Wine.

We have also included a number of hacks and fixes in our Wine build, some of the hacks include the unsupported DIB Engine. We know its not perfect but it allows our customers to use it if needed. We have also built in Pulse Audio support for the Linux release, added a memory hack to the BSD build and many other small hacks that were not possible before. In the near future we will be able to support IE 8, Microsoft Outlook, Microsoft Office 2010, and much much more.

Now that the Wine bundle is complete and all of our current supported applications run we plan to re-write the front end and make it extremely simple to install any application or game through the new UI. The new Bordeaux User Interface is next on our todo list and our plans are to ship Bordeaux 3.0.0 by early 2011. We will also be adding some new features to our Cellar manager, these changes will make it possible to add a new cellar and configure a cellar more easily, the new Cellar manager changes will be released in a upcoming 2.2.0 release. As soon as the main UI is complete we will ship Bordeaux 3.0.0 for Linux, FreeBSD, PC-BSD and MAC.

Here is a screen shot of a mockup Bordeaux 3.0.0 UI 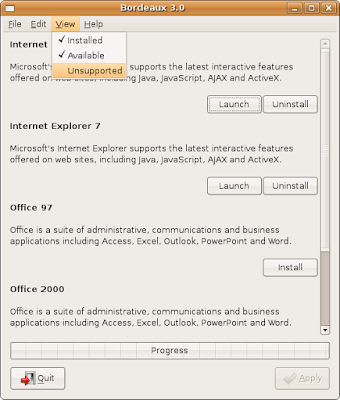 After the new front end is complete we also plan to have our own application and game database and then tie it into the UI so you can instantly see what other peoples success are with any given application.

Here is a recent screen shot of Pulse Audio working in Bordeaux on Linux. 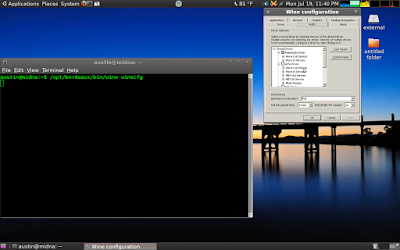 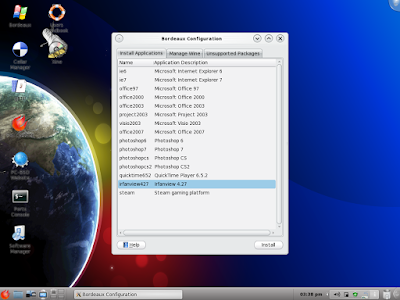 If Bordeaux is something your interested in we would ask that you purchase the current 2.0.8 release to help fund future releases. All of the above changes take one of two things time or money. And with your support we can invest in more hacking hours and have Bordeaux 3.0.0 ready for release in just a couple short months.

Keep in mind if you make the purchase now you get six months of upgrades, so you will also get version 3.0.0 and any service releases.

Posted by twickline at 4:28 PM