Why there is a Market for Linux Games

Linux users are starved for quality games - there is no doubting that. Bring up the topic of a Linux port on most gaming forums and you will typically see responses about the market share of the operating system, that Linux users are cheap (thus why they use a free operating system) or there are too many package formats to support (which really is a non-issue). I'm not even going to bother trying to argue the point of market share, we all know Windows is a large majority and Linux is the under dog - lets leave it at that.

Lets stop and think about something for a moment - nowhere near all of those Windows users are gamers. In fact with the world we live in that is so heavily populated with consoles I would be surprised if even half of the people using Windows are the type that go out and purchase the latest and greatest PC games (or even play casually). Linux users on the other hand are typically a more tech savvy bunch and tech savvy people more often than not tend to gravitate towards being gamers.

Alright - enough speculation and assumptions, lets look at some cold hard numbers. Two recent games that had successful Linux ports would be 2DBoy's World of Goo and Frictional Game's enumbra Series. 2DBoy reported that since they released their Linux port of the game 10% of their total game sales have been for the Linux platform. Frictional Games reports a similair statistic - in fact 12% of their sales for the Penumbra series up to this point are for the Linux operating system.

Still need more convincing? If you have not been made aware of it yet as of my posting this there are still two days left to participate in the Humble Indie Bundle experiment. The Humble Indie Bundle offers your five games (including World of Goo and the first of the Penumbra series) at what ever cost you can afford. All five of the games are fully cross-platform (Windows, OSX, Linux) and when you make your donation you are asked to mark which operating system you are purchasing the games for. Take a look at the following statistics up until this point from the donations they have received: 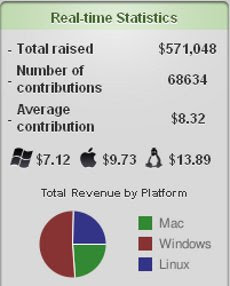 Judging by that pie chart Linux users appear to make up almost 25% of the donations and their average donation amount is almost double that of the average Windows user donation. This means that of the 571,048$ donated thus far 142,762$ is from Linux users. But remember Linux users are cheap and their is no money in Linux game market - right.

Games that already exist on only the Windows platform need ports as well. In fact there is so much demand for some of these games to run on Linux that Codeweavers has a business commercially supporting many of these titles on the Linux operating system (it's not perfect - but for now it works).

Posted by twickline at 6:12 PM