"We've modified our installer so that in many cases users can install an application from a single screen, using a single click," said Jeremy White, CodeWeavers chief executive officer. "We want to make the whole process as intuitive and painless as possible."

Another new feature is CrossOver's ability to download installation "recipes" directly from CodeWeavers online Compatibility Database. "If another CrossOver user has figured out how to use CrossOver to install a Windows application, they can upload that installation recipe to our database," said White. "As we go forward, and build this online storehouse, CrossOver will begin to automatically install that same application for other users. This enables us to move closer to a world where CrossOver will begin to run the majority of Windows apps, and not just an officially supported subset.

"In other words, our diabolical plot for world domination is going exactly as planned," he added.
"This new compatibility feature is an important advance," said John Rizzo, Editor in Chief of MacWindows. "It means that CodeWeavers is taking their core technology an extra step and adding user convenience. It makes switching to a Mac or Linux machine a lot less scary for some users. It also means that software manufacturers can post their own recipes to help extend their existing Windows software into new markets." White confirmed that CodeWeavers offers porting services to Windows software developers as well.

CrossOver 9.0 is available immediately at www.codeweavers.com. The Standard version of the product costs $39.95; the Pro version costs $69.95.

About CodeWeavers
Founded in 1996 as a general software consultancy, CodeWeavers focuses on the development of Wine –the core technology found in all of its CrossOver products. The company's goal is to bring expanded market opportunities for Windows software developers by making it easier, faster and more painless to port Windows software to Linux. CodeWeavers is recognized as a leader in open-source Windows porting technology, and maintains development offices in Minnesota, the United Kingdom and elsewhere around the world. The company is privately held. For more information about CodeWeavers, log on to www.codeweavers.com. 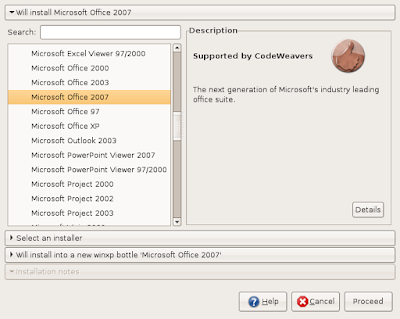 Posted by twickline at 9:48 PM