vkd3d-proton version 2.6 has been released 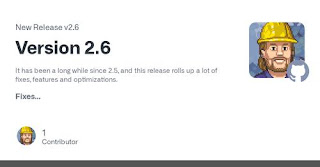 It has been a long while since 2.5, and this release rolls up a lot of fixes, features and optimizations.

Support D3D12 pipeline libraries better where we can now also cache
generated SPIR-V from DXBC/DXIL.
Massively reduces subsequent load times in Monster Hunter: Rise,
and helps other titles like Guardian of the Galaxy and Elden Ring.
Also lays the groundwork for internal driver caches down the line for games which do not use this API.
Also, deduplicates binary blobs for reduced disk size requirements.

Shader model 6.6 is now fully implemented. This includes support for:

2.6 is expected to be the last vkd3d-proton release before we require some newer Vulkan extensions.
VK_KHR_dynamic_rendering and VK_EXT_extended_dynamic_state
(and likely dynamic_state_2 as well) will be required.

MacOS and Windows software bundles, save up to 90% off the normal retail price only at BundleHunt.
Posted by twickline at 10:21 AM