vkd3d-proton version 2.2 has been released 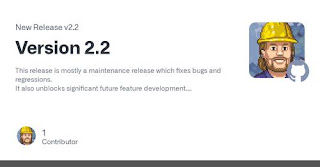 This release is mostly a maintenance release which fixes bugs and regressions.
It also unblocks significant future feature development.

From recent testing on our end, it is unknown at this time if VK_VALVE_mutable_descriptor_type is still required for
Cyberpunk 2077. Manual testing hasn't been able to trigger a GPU hang.
The memory allocation rewrite in 2.2 can plausibly work around some of the bugs that VK_VALVE_mutable_descriptor_type fixed by accident.
The bugs in question could also have been fixed since release day, but we cannot prove this since the bug is completely random in nature.

DXR is not yet supported, but has seen a fair bit of background work.