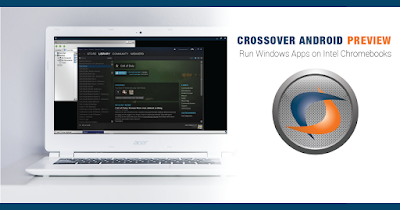 Think about this…When this development started, there were few, if any, Intel based phones. When this development started, there were no Intel based tablets. There was no X86 Android project. There were no Intel based laptops or clamshells. Our development team essentially built a solution for a problem that could not be solved or fixed. At best, they were building a hypothetical solution to prove that it could be possible to run Windows based applications on an Intel Android device. It’s like Henry Ford building a car for a population that didn’t have roads; or Thomas Edison creating a light bulb for a population that didn’t have electricity. And yet, here we are…

Allow me to clearly state that like the first Model T’s and the very first light bulbs, CrossOver Android is far from perfect. It will run a very limited number of Windows applications (some because they just aren’t supported yet on Android and some because Android doesn’t / won’t support them at this time). The former implies that our support isn’t good enough, yet. The latter implies that Android does not have some key components, like OpenGL, to run some Windows applications. AND there is a point to make that some devices just doesn’t have the RAM, disk space, or processing power necessary to run a Windows application. And some devices, like phones, just don’t have the physical screen necessary to make running a Windows application all that appealing. Needless to say, your ‘mileage’ as to how useful CrossOver Android will be come tomorrow will vary.

So what do you NEED to know to make the CrossOver Android Tech Preview as useful as possible for you at this time?

Finally, you need to have an open mind. The first Model T didn’t race down the highway at 100 MPH. The first light bulb didn’t last for 2000 hours before burning out. CrossOver Android is a Tech Preview. It does some very cool things. It does run Steam. It does run Office 2010. It does run Wizard101. It does not run EVERY WINDOWS APPLICATION KNOWN TO MAN.

So be patient with us. We ARE committed to making the software better and better and better with each passing release. And maybe someday, CrossOver Android will race down a highway at 100 MPH. Who knows??? When we first started development, we didn’t even have a target device in mind (and look at where we are today!!!). When we move from Tech Preview to possibly an Alpha and then straight to a Beta and then to Release Candidate and then to version 1.0, who knows what we’ll be capable of doing? Heck this Androidism thing might just be the start of a technology revolution. We may all be on the front lines of the NEXT BIG THING. (I should probably trademark Androidism now while I have the chance).