vkd3d-proton version 2.1 has been released 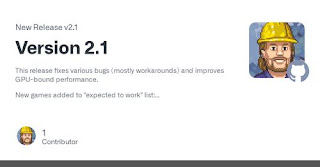 New games added to "kinda works, but expect a lot of jank" list:

(**): Currently only runs correctly on AMD hardware with RADV and VK_VALVE_mutable_descriptor_type.
As of game version 1.03, this requires the latest Mesa Git build.
The game has some fatal bugs where it relies on undefined behavior with descriptor management
which this extension works around by accident.
The game will start and run on NVIDIA, but just like what happens without the extension on AMD,
the GPU will randomly hang, making the game effectively unplayable.
A game update to fix this bug would likely make the game playable on NVIDIA as well.
Game version 1.04 changed some behavior, and support for this game will likely fluctuate over time as future patches come in.