Thank you for purchasing an advanced copy of Bordeaux for Mac OS X!

STOP NOW AND PLEASE READ! If for any reason you are not satisifed with your purchase, let us know within 30 days and we are happy to provide a full refund.

When you install this release of Bordeaux for OS X a directory on your HardDrive will be created called Bordeaux Applications. In this folder, you will have tools which allow you to install and manage Windows Applications under OS X. Simply select Install Windows Applications to get started. At this time while you are presented with a list of many Windows applications that can be installed, only Internet Explorer 6.0 and Microsoft Office 2007 are supported. Future beta releases will include more applications as support is added.

Once your applications is installed a new directory will be created called "Windows Applications" in the root of your Hard Disk. From there you will have a standard application bundle you can use to launch your program. Support for native icons will be added in the next beta. 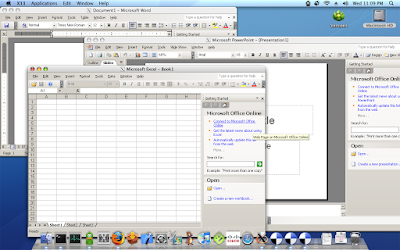 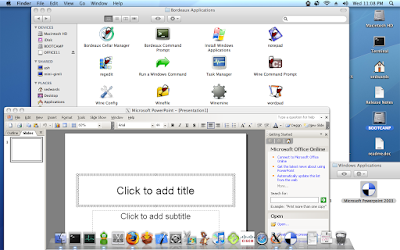 There is a multitude of software developed only for the Windows operating system and even when software vendors port their applications to another platform, generally it lacks features that the Windows version contains. The only solution these developers face is to have access to both systems for testing which leads to increased infrastructure demands, and wasted project resources. If you are vendor interested in supporting your application on Linux, BSD, Solaris or Mac OS X or a software user that needs to run a Windows application on Linux, BSD, Solaris or Mac OS X we can help.
A advanced copy of Bordeaux for Mac OS X can be purchased for $20.00 in the store.