Bordeaux 1.6 is now running on current Solaris and OpenSolaris systems.

I have been working with a couple friends over the past two weeks to get Bordeaux running on Solaris and OpenSolaris 2008.11. We now have everything compiling and running but like always more testing needs to be done before it's ready for final release.

The installer, Bordeaux programs, built-in Wine programs, bordeaux-winetricks, and a couple small test apps are the only applications we have gotten around to testing as of today. The good news is everything that's been tested works very well on both Solaris / OpenSolaris and everything is extremely stable.

We should have a final release ready within the next day or so, as we have started testing the main supported applications today. I'm posting this information now so Solaris users are aware of the pending release and can have the below dependencies installed and any problems resolved in advance of the release...

The cost of Bordeaux 1.6 is $25.00. Anyone who has purchased Bordeaux in the past six months is entitled to a free upgrade. Bordeaux comes with six months of upgrades and support and of course a 30-day money back guarantee.

The Bordeaux Technology Group is a software services and development company specializing in Windows compatibility software. Users of Linux, BSD, and Solaris systems from time to time find themselves in the need to run specialized Windows software. The Bordeaux suite enables access to these programs and data in a seamless and low cost manner without requiring licensing of Microsoft Technology. The Bordeaux Group also provides migration services and support for alternative operating systems specializing in Windows compatibility.

There is a multitude of software developed only for the Windows operating system and even when software vendors port thier applications to another platform, generally it lacks features that the Windows version contains. The only solution these developers face is to have access to both systems for testing which leads to increased infrastructure demands, and wasted project resources. If you are vendor interested in supporting your application on Linux, BSD or Solaris or a software user that needs to run a Windows application on Linux, BSD, or Solaris we can help.
Version 1.8 New Features:
Fixed broken winetricks download locations
In order to run Bordeaux you will need to install the base packages from
http://www.sunfreepacks.com/.

Bordeaux also needs xmessage which is not include in (SXCE 104). You can easily fetch the source from:

Here is a full list of dependencies Bordeaux requires on Solaris and OpenSolaris sysyems.

Most of the above dependancies can be installed from the OpenSolaris
"Pending" Repository.


"Microsoft Word 2003 on OpenSolaris via Bordeaux" 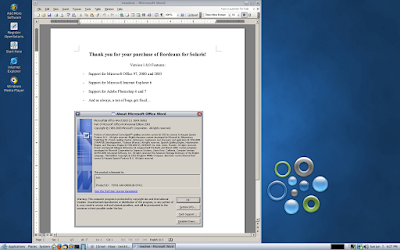 Bordeaux for OpenSolaris has been Released!
Posted by twickline at 1:52 PM

Now all I have left to nag about is GNU stack and gcc 4 and that is not really qualified nag even since it is possible today all though not out of the box.

Is there any update on the official release? The Bordeaux website only shows an option for BSD and Linux. Will the BSD version work on OpenSolaris?