Johan Dahlin sent in a patch to add msxml6, and said
"It's enough to make msi2xml.exe to at least start-up
(before failing in msi later)."

Tom Wickline some time ago sent in a suggestion for
adding riched30. I didn't know any apps it helped, but
apparantly Novell thinks it helps Groupwise a bit.
So it's in now. Caution, it doesn't update riched32, no idea
what happens if apps try to use it after this...

Shortly after this e-mail Dan sent another mail announcing that he has now included a GUI for winetricks within the script.

Some users freak at the thought of a commandline,
so I threw together a trivial GUI using whatever
gui-from-shell tool is appropriate for the current desktop.

Unfortunately, that means the default action is to put
up a gui, not show help. You have to say winetricks -h
or the like to get help. 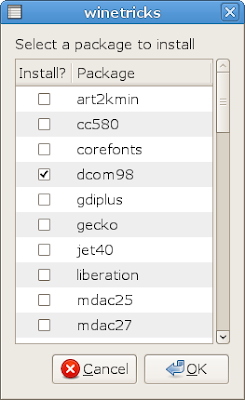 As always, it's available at:
http://kegel.com/wine/winetricks
and the svn repository is:
http://code.google.com/p/winezeug/

Posted by twickline at 2:49 AM