Running PuTTY for Mac on a Retina 5K Display

I have had a few people ask me recently if Putty for Mac would run on their Retina Display and after doing some test I can happily say it runs perfectly fine. Their is however one minor outstanding issue, PuTTY won't run at ultra-high resolution at this time. Now back to working on the upcoming PuTTY for Mac 9.0.0 release.  :)


Click on the image to see the full size image : 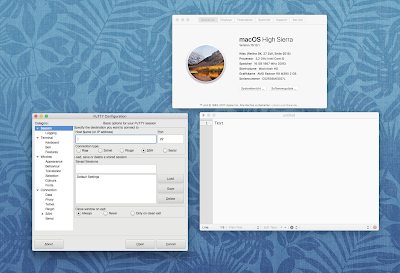 About PuTTY for Mac :

The cost of Putty 8.7.0 is only $15.00. Anyone who has purchased Putty in the past three months is entitled to a free upgrade. Putty comes with three months of upgrades and of course a 14-day money back guarantee.

Posted by twickline at 9:42 AM