CodeWeavers releases a open beta of CrossOver for Chrome OS

Today is a very exciting day - we have released an open Beta of CrossOver on Chrome OS, which runs on the Android subsystem of Chrome OS and makes it possible to easily and cleanly run Windows applications on an Intel based Chromebook.

This is a particularly satisfying for me, personally.  That is, I have always loved technology best when there is are a lot of vibrant options in the market.  With the launch of CrossOver, we believe that Chrome OS becomes an even more compelling choice.

And I love this version of CrossOver; I think it's our cleanest and most elegant version yet.  It's inspired by the simplicity and elegance of Android and Chrome OS; I think it's by far the best CrossOver we've ever made.

It's been a long journey - we've been experimenting with Android support for the past four years, and it's been ten years since we added a new major operating system (we launched CrossOver Mac in January of 2007)... 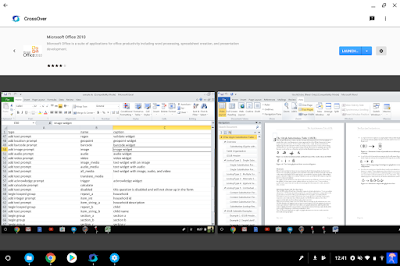