WineHQ WineConf 2010 dates and location have been set

Francois Gouget the coordinator of this years WineConf sent a e-mail to the wine-devel mailing list informing everyone of the date and location of WineConf 2010.

Below is a copy of Francois e-mail with relevant information on WineConf 2010.

WineConf 2010 is taking shape, the date has been set and we are now in the final stages of picking the venue.

So mark the date in your calendar and start booking your plane tickets, this will be the place to be for Wine developers.

Note that most further communication will happen on the wineconf@winehq.org mailing list so subscribe there to get all the details. You will also find all the details you need as they become available on WineConf 2010s Wiki page:

Posted by twickline at 5:01 PM No comments:

A couple days back I was looking for a tool to create a sitemap of our sites so I could send the sitemap to Google and Yahoo to help improve our site listings and page rank. After allot of waisted time trying to create a decent sitemap with the free online SiteMap Generators. Most if not all of free online Sitemap Generators are fronts to serve ads or in the end try to sell you what they advertise as free! Most of the free online SiteMap Generators only create 500 links, and if you have a large site this is not acceptable. And if you find a Generator that does upto 5,000 links at the end of the process they then ask for a payment before they hand over the "what was suppose to be free" data.

Just when I was about to give up I came across a tool that not only does what it says but also does so much more. Sitemap Generator from WonderWebWare was just what I was looking for. Below is how to run this and other tools from WonderWebWare on Linux, Mac, FreeBSD, and OpenSolaris with Bordeaux or vanilla Wine from WineHQ.

I ran the programs on Linux but they should also run on any platform that Wine runs on.

Sitemap Generator is a free software that will help you to automatically generate sitemaps in google (XML) or yahoo (TXT) format or just to spider your website and collect all the internal links for you. The tool may export collected links to CSV or HTML file too. The main reason to build this tool was that all other similar programs didnt fit my requirements.
This software is free for any use, but comes without any warranty. Please, note that the program acts like a spider, but will download all the pages of the target site. Do not use this tool to crawl 3-rd party sites without their permission.

Although the program isnt very simple, the way it generates the map is simple, it acts like a web-spider. When you give the starting url to the tool, it will start crawling your site, extracting all the links from all the pages.

Download and setup on Linux with Bordeaux or Wine
SiteMap Generator Download
Bordeaux version used 2.0.4 for Linux
Wine 1.1.44 or higher should also work

This howto is based on installing and using SiteMap Generator with Bordeaux but a recent version of Wine from WineHQ should also work without any problems.

After you download SiteMap Generator you will need to install it as a unsupported application with Bordeaux. To do this is extremely simple just run the installer with Bordeaux bundled Wine from the command line and install the software.

The program should install without any errors, after the install has completed you will need to cd to the install directory and then run SiteMapGen.exe

At this point SiteMap Generator should run without any problems.

Below is some screenshots of SiteMap Genorator running on my laptop with Ubuntu Linux installed. I created a sitemap for http://www.wine-reviews.net/ and then submitted it to Google and Yahoo! 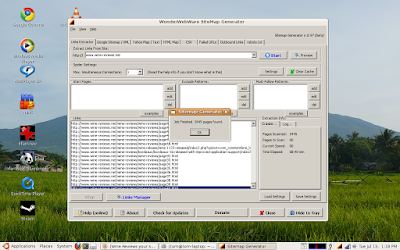 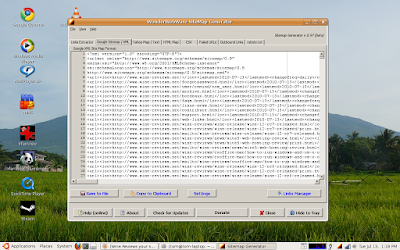 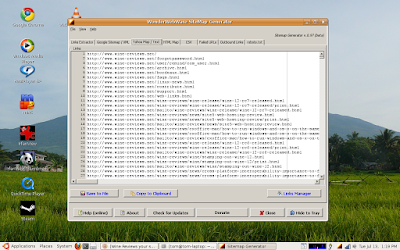 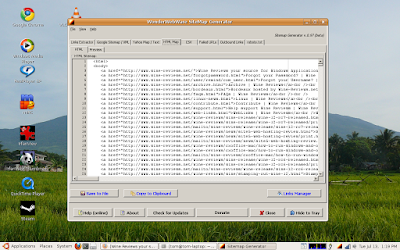 Preview of the HTML Map. 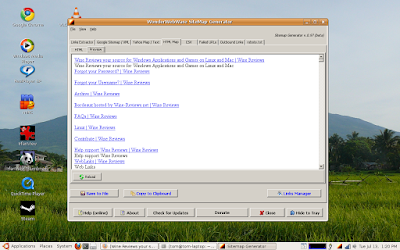 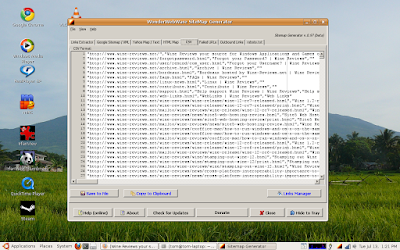 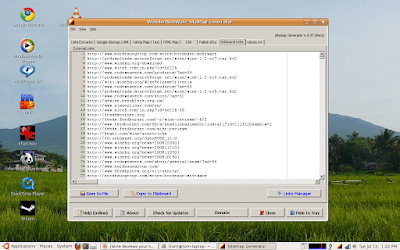 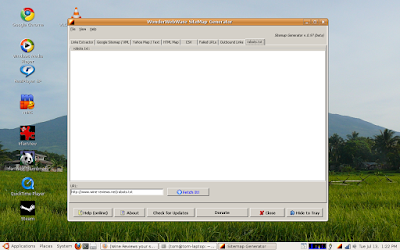 Robots.txt after a Fetch. 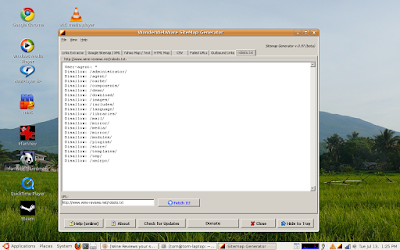 Saving a new Sitemap.xml file so it can be sent to Google. 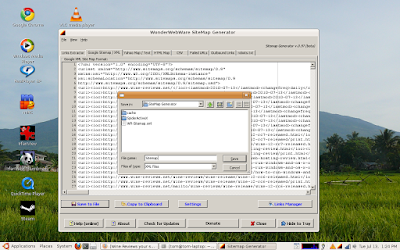 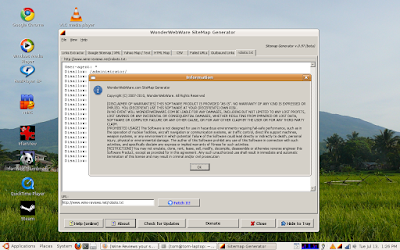 I also wanted to use "Site Submit" to Submit my sites to about 5000 seo friendly ("dofollow") directories.

Site Submit is the new kid in the town: a simple semi-automated website submission tool which can speed up the directory submission process. The main advantage is that it's free, however (if the public is interested) I plan to add more features, more directories and some sort of online updates... The tool comes with about 5000 seo-friendly ("dofollow") directories in the database.
Site Submit also works near perfect if you install it into a IE 6 or 7 Cellar. This is verry easy to do because at this time Site Submit comes in a zip archive. After you install IE with Bordeaux or Wine all you need to do is un zip Site Submit in the Programs Directory and then cd to the SiteSubmit directory and then run SiteSubmit.exe

SiteSubmit on Linux with Wine and Bordeaux. 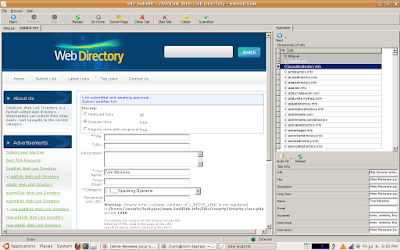 Posted by twickline at 2:46 PM No comments:

How to Run Windows and OS X on the Same Mac

OS X or Windows? Run them both on the same machine without any trouble.
A hybrid engine that runs on gas and electricity. A football star who plays both defense and offense. A politician who understands social justice and capitalistic expansion. These anomalies are rare, but in the world of tech, they are almost unknown entities. For anyone who owns a Mac, it might seem a bit odd to think you can run both the Mac OSX and Windows, and switch effortless between them. Yet, not only is it possible to live in these two universes, it actually makes perfect sense.

One reason is that there are a handful of applications, and even a few Web sites, that only work on a PC. The most obvious examples are enterprise-level tools at work, including some apps from Oracle and Microsoft that do not run on the Mac platform and probably never will. A few Web sites require an older version of Internet Explorer, which is not even offered for the Mac anymore. And, many of the latest games such as Mass Effect 2 are not available for the Mac.

Fortunately, Apple offers an application called Boot Camp which allows you to run Microsoft Windows as though it was meant for your Mac all along. A few other virtual machine tools exist as well, including Parallels 5 and VMware Fusion, adding a few features and adding some performance perks. For more industrious users, you can also use a program called Crossover which actually runs the Windows app as though it works on a Mac, even though this approach is a bit hit or miss.
For those who want to run both Mac and Windows, heres an overview of the advantages to each approach, and a few pitfalls to avoid along the way.

Apple Boot Camp
The free Boot Camp app for Mac, included with every Mac, has one major difference compared to Parallels and Fusion: it requires that you reboot your computer. Thats only a minor annoyance, but Boot Camp does require you to live either in Windows or Mac and switch back and forth.

Boot Camp also supports Windows 7, but you do need the latest Mac OS X v10.6 Snow Leopard version and the Boot Camp 3.1 Update, which you can download using the system update utility or get directly from the Snow Leopard install disc.
The important point to make here is that you will need your own licensed copy of Windows 7 (or a previous version) and, using the Boot Camp Setup Assistant (located in Applications/Utilities), you will need to install the operating system as though you just bought a brand new PC. After the install, you will also need to install the Mac drivers for Windows. (That might seem odd, but this is the step that makes Windows work with the Mac hardware.) Just insert your OS X DVD when prompted. You will also need to run the Apple Software Update utility from within Windows to update the drivers.
Then, to use Boot Camp, you just hold down the Option key when your Mac boots. You will see an option to boot into Windows or the Mac. Select the one you want and youre off.

Now, about performance. Its obvious that a Mac is designed for the best performance with OS X. Running Windows, you will notice the speed is mostly adequate, but not that comparable with a brand new laptop from, say, HP or Dell that is designed (and thoroughly tested) for Windows.

One last option if you really need to run Windows apps on your Mac is CrossOver Mac, a program that uses the Wine toolkit. CrossOver makes it look like a Windows app runs natively on your Mac, mostly by loading just the required application framework. So, for example, if you want to use Microsoft Office 2007, you can load CrossOver and then install the app and run it in a window, without actually loading Windows at all.

When CrossOver works, it works wonders. The app supports popular mainstream apps like Microsoft Office and Outlook, but not any of the major Adobe products. A separate app called CrossOver Games lets you play a small number of older games, like the first Call of Duty games, but not recent titles.

CrossOver is a good idea, though, if you just need to run basic apps and dont want to bother installing Windows itself. And, the costs just $40 so it is half the price of a virtual machine app.

Posted by twickline at 4:56 PM No comments:

By Jeremy White
Everyone in the Wine community is driving to release Wine 1.2 the newest and best version of Wine.
Its been two years since Wine 1.0, and weve really made huge strides. This version will include the beginnings of genuine 64-bit support, along with major Direct3D improvements, and improvements in a huge number of other areas.

Since the majority of CodeWeavers staff are Wine developers, that means were busily working on Wine 1.2 ourselves. Further, were working to roll Wine 1.2 into CrossOver 9.1 and CrossOver Games 9.1. We are really happy with the improvements and think this is going to make the very best CrossOver release.

However, its not that easy, because of the unusual relationship we have with Alexandre Julliard, the maintainer of Wine. That is, while he is our CTO, and helps enormously with CrossOver, we also have a clear understanding that he is completely autonomous in his role as the Wine maintainer.
So when we ask him, in his role as Wine maintainer, when Wine 1.2 will ship, he simply tells us when its ready. He goes on to discuss regression counts, and productivity of developers, and so far as I know, how the tea leaves look to him. This drives James, our VP of Sales absolutely crazy, which perhaps is the point.

So the official timeline for CrossOver 9.1 is one tad after when it's ready.

Posted by twickline at 2:34 PM No comments: