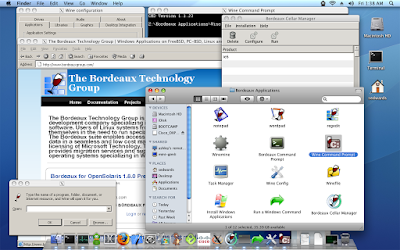 We have been working hard over the past month to get Bordeaux running on Mac OS X and all that hard work is starting to pay off. We now have everything compiling and running but like always more testing needs to be done before it's ready for final release.

The installer, Bordeaux programs, built-in Wine programs, bordeaux-winetricks, and a couple small test applications have been tested. The good news is everything that's been tested works very well and everything thus far tested has been stable.

Starting with the Mac OS X release of Bordeaux we are going to start bundling our own version of Wine. While this is allot more work, it will allow us to include some much sought after features that have been missing from vanilla Wine builds. For example the (always in the work's) DIB engine will be one of these new features. And with bundling Wine we can also Bundle in some other needed tools such as cabextract and unzip to make the use of Bordeaux and Wine as user friendly as possible.

When we ship the final stable build the cost will be $25.00 per licence. At this time we will process pre sales for Bordeaux 1.8 for Mac and when the final build ships you will still receive your full six months of upgrades and support.

The final build will have support for Internet Explorer 7 and possibly other applications depending on what pre-order customers tell us.

There are a number of bugs in Winehq that we really want to fix. Currently stock Wine does NOT support building App bundles that can be easily used from the Finder. We plan to implement this in Wine and give all the changes back under the LGPL.

In the end all of our Mac work is going to go back in to stock Winehq, but the more support we get through purchases, the less trouble it is to do, and the more we can do.

Bordeaux for Mac OS X will be added to the store for pre-sales in the next day or so, if you want to be included in the beta group send a e-mail to Bordeaux sales with your order number and we will add you to the group.

Thanks for your support!

Posted by twickline at 4:51 PM