All good things must end

Over the past year we have been letting our reader know about a special offer from CodeWeavers to save 30% off CrossOver Pro and Games for Linux and Mac. CrossOver also runs on FreeBSD B.T.W all you need to do is buy a Linux or Mac licence then sign up as a advocate and then go to the nightly builds section and the FreeBSD builds can be found there.


Here is a screenshot of the FreeBSD downloads. 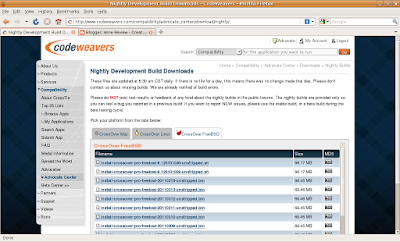 As the title says the 25% off "ComeToTheLight" dealcode, e.g coupon will expire on March 31st 2011. So if you need a copy of CrossOver to emulate Windows on your Linux or Mac computer this is a good time to get it before the "ComeToTheLight" dealcode expires. Just go to CodeWeavers store and add the products you need and then proceed to checkout. In the Checkout section is where you add the dealcode, after adding the dealcode just refresh your cart and the 30% discount will be given.

I hope in the future we will have another dealcode for our readers, but that is still in the works and when we have something finalized ill be sure to post about it. But keep in mind another dealcode hasn't been given at this time, so take advantage of this while you still can. If you can Tweet or post about this on your FaceBook page, Blog or Web Site and let others know to buy now and get a 30% discount you might gain a friend or two. :)

About CrossOver :
CrossOver lets you run Windows software on your Mac or Linux computer. You can think of it as an emulator, but CrossOver's different, because there's no Windows Operating System license required. It's like running Windows on your computer, but without Windows.

About CodeWeavers :
Founded in 1996 as a general software consultancy, CodeWeavers focuses on the development of Wine the core technology found in all of its CrossOver products. The company's goal is to bring expanded market opportunities for Windows software developers by making it easier, faster and more painless to port Windows software to Linux. CodeWeavers is recognized as a leader in open-source Windows porting technology, and maintains development offices in Minnesota, the United Kingdom and elsewhere around the world. The company is privately held. For more information about CodeWeavers, log on to www.CodeWeavers.com.
Posted by twickline at 7:17 AM