Transgaming customers can now save 25% off CrossOver Games

CodeWeavers and Wine-Reviews have put together a special dealcode just for gamers and especially Transgamers. So if your a current or ex Transgaming Cedega customer and you would like to take the leap and switch over to CrossOver Games now is the perfect time to do so. With this special dealcode "ComeToTheLight" you will receive a instant 25% discount off the normal retail price of CrossOver Games or CrossOver Professional.

Update 01/23/2018 : The ComeToTheLight dealcode has expired, you can now use "UNITY" as your dealcode and save 30% off CrossOver for Mac and Linux.

The new and improved CodeWeavers CrossOver version 9 was recently released, So if you need a Windows Application or Games to run on Linux or Mac OS X this is your chance to get it at 25% off the normal selling price.

Now gamers can play the games they want, on whatever platform they want! With CrossOver Games, you can run many popular Windows games on your Intel OS X Mac or Linux PC. Whatever your tastes — first-person shooters, fantasy, strategy, MMORPGs — CrossOver Games lets you run many popular game titles. CrossOver comes with an easy to use, single click interface, which makes installing your games simple and fast. Once installed, your game integrates seamlessly with your Desktop. Just click and run! Best of all, you do it all easily and affordability, without needing a Microsoft operating system license.

Supported Games
CrossOver Games is capable of running a wide range of Windows games. To see if your favorite game is supported, please check the CrossOver Compatibility Center. Select "Show All Applications" to see a full list of ranked Applications and Games.
CodeWeavers officially supports the following games:
Keep in mind this sale is for a limited time only, and may be discontinued at any time. So take advantage of this offer while you still can, just apply "UNITY" and save 30% and then start playing your favorite games on Linux or Mac OS X.

Update : 06/09/10
Here is two screenshots showing the "ComeToTheLight" discount at CodeWeavers. You can use this discount for both CXGames and CXOffice. The discount can by both used by Linux and Mac users. :) 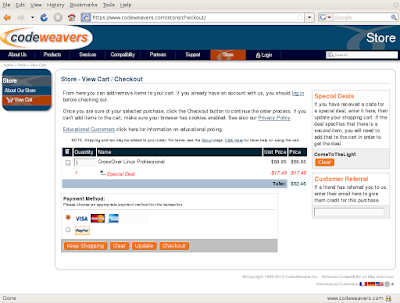 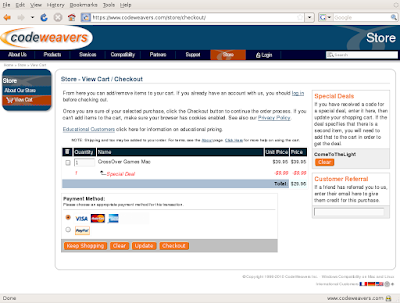 Update 01/23/2018 : The ComeToTheLight dealcode has expired, you can now use "UNITY" as your dealcode and save 30% off CrossOver for Mac and Linux.
Posted by twickline at 7:10 AM

This is a very good software,thanks for share it's a great article...