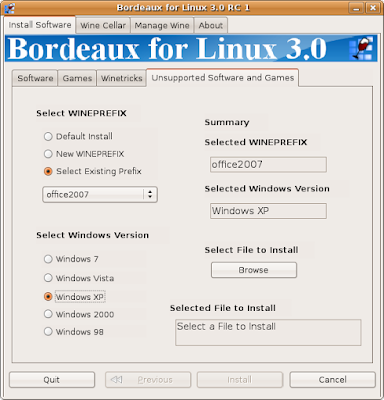 Posted by twickline at 11:28 PM No comments:

Dan Kegel released winetricks 20110105 today. New version 20110105 has only two notable changes:
1. it will retry a corrupt download for you (this should get rid of most cryptic warnings about needing to rename a file and retry),

2. a first run dialog now asks whether you would like to help winetricks development by reporting usage stats. You should only see this dialog once (and only if you're using the gui, and only if you're using zenity). This has been very helpful already, as people have been running it from svn. Please let me know what you think of it.
Experimental new version 20110105-alpha has a few further changes:
3. The menu is now broken up by category; there is now a top-level menu which gives you a choice of category (dll, font, app, or setting). This ought to make the menu a little less overwhelming. Let me know what you think of the new menu navigation.
4. There's now a progress dialog during downloads in gui mode.
5. It should work better when the user has removed the Z: drive.
6. Its been refactored to make adding new verbs much easier (you no longer have to edit the script in multiple places to add a verb, and you can even put verbs in external files).
7. Added 35 games. (A bunch more remain to be ported from wisotool.)
8. Removed (or, rather, haven't ported yet) a number of less-common verbs. The statistics gathered by the new version will tell us which of the remaining verbs to port first.
Changes in version 20110105:

MacOS and Windows software bundles, save up to 90% off the normal retail price only at BundleHunt.
Posted by twickline at 9:10 PM No comments:

Said Jon Parshall, CodeWeavers COO, “We’re excited to be providing a great Windows compatibility solution to LinSoft’s customers—a solution that saves them time and money, and having to purchase a Windows license to run their needed applications.” Oliver Poths, LinSoft’s founder, echoed this sentiment, noting that “Linux on the desktop has always been highly cost-effective. But now it’s becoming increasing user-friendly as well. Tools like CrossOver provide Linux desktop users with a great user experience.”

About CodeWeavers
Founded in 1996 as a general software consultancy, CodeWeavers focuses on the development of Wine – the core technology found in all of its CrossOver products. The company's goal is to bring expanded market opportunities for Windows software developers by making it easier, faster and more painless to port Windows software to Linux. CodeWeavers is recognized as a leader in open-source Windows porting technology, and maintains development offices in Minnesota, the United Kingdom and elsewhere around the world. The company is privately held. For more information about CodeWeavers, log on to www.CodeWeavers.com.

Posted by twickline at 2:42 AM No comments:

With the recent announcement that the Russian government will mandate A shift from Microsoft to Linux by 2015. I started thinking about what the Russians will do if they have some Windows Applications that don't have Linux equivalents at this time.

This isn't just for Russia, this is also true for many other countries around the world that's making the shift away from Microsoft Windows to Linux.

Then their is smaller state and local governments that are also making the shift to Linux. And for smaller governments the cost to develop or to port a custom application to Linux might be prohibitive. But with the purchase of volume CrossOver licences the cost would remain within budget. As the local government would save the cost of the Windows licence that's allot more expensive then the cost of CrossOver.

Then their is the power user who has two or more computers that run Linux or Mac and who wants the option to run certain windows applications or games on their operating system of choice. With a volume purchase of two or more licences you can receive a discount off the full retail price.

Lastly I would suggest LUG users or people who have friends who also use Linux or Mac to setup a home brew Groupon. And one person take every ones order and then make the volume purchase for the discounted price. This way everyone in the group gets a higher discount as more licences can be purchased at a single time.

So how does volume licensing work?

For example if you purchase 2 to 9 licenses you will receive a 5.6% discount off the normal retail selling price of $69.95 and as you can see in the table below the more licenses you purchase in a single block the higher the discount received. The maximum discount goes up to 43% off retail for 1000 or more licenses purchased at a single time. While a $40,000 purchase might seem like allot to a single user, this is well within range of normal software purchases for large business, educational intuitions, and government of all sizes.

For more information on CodeWeavers volume licencing click this link.

Prices for Currency: ($) US Dollar

CodeWeavers strongly believes in the power of open-source solutions to help deliver critically needed software at reasonable prices to educational institutions worldwide.
Posted by twickline at 2:16 AM No comments: