The new and improved CodeWeavers CrossOver version 9.2.1 was recently released, So if you need a Windows Application or Games to run on Linux or Mac OS X this is your chance to get it at 25% off the normal selling price.

CrossOver 9.2.1 contains many fixes to existing applications, and just generally makes the product better. As of this writing CrossOver has been merged with Wine 1.2.1 and contains many improvements for Internet Explorer, Microsoft Office, Quicken, PhotoShop and many other supported and none supported applications.

Third, and perhaps most important, the CrossOver installer will now be directly linked to their online Compatibility database and allow people to install unsupported software via (recipes) contained on the Compatibility Center.

Here is a screenshot of the Crossover Professional 9.0 (UI) user interface. 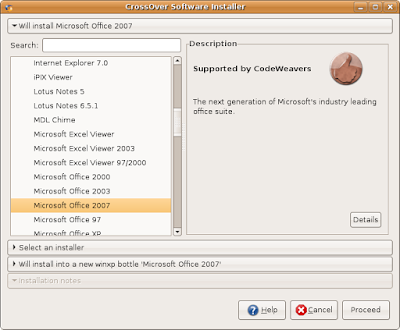 Keep in mind this sale is for a limited time only, and may be discontinued at any time.
Posted by twickline at 5:43 AM