Running Windows Applications On A Mac Without Windows CrossOver 14.1.3 Review

Running Windows applications on Linux and Mac systems has come a long way. I remember doing virtual machines, like QEMU, and VirtualBox, running a guest in Vista or XP, and while it does run as expected, the overhead costs of running a whole operating system in a VM environment can be big (I still do use these programs, particularly VBox for development purposes).

Around 2004-2007ish, I’ve was doing some application testings for a little program named WINE (I also have a friend, Tom Wickline, of Wine Reviews, who incidentally was the indirect reason why I created this blog in the first place (we did a review of PlayOnLinux in the past together, and it was so much fun, that I created this blog out of a whim). No, WINE is not a alcoholic drink, but instead it is rather a program that emulates different Windows APIs in linux and mac systems. It was also a challenge to compile for beginners too (I do not compile in mainstream linux OSes in the past but rather in smaller hobbyist type Linuxes like Alinux/PeanutLinux or PCLinuxOS). Real life happened though, so I had to give up this hobby.

Before We Start
Before we start, let us see the levels of compatibility in these programs according to WINE compatibility levels:

Bronze – programs can install and run, with fundamental functionalities intact. However, the applications running have enough bugs that CodeWeavers advises running them with caution (save early and often).

Silver – programs can install and run well enough to be usable. There are however bugs that are found to let the program run flawlessly.

Gold – programs can install and run as you would expect if you are running Windows.

Microsoft Office (Officially Supported, Bronze)
Microsoft Office is an Office Suite of Word Processor, Spreadsheet, Presentation Software, among others. It is basically the proprietary equivalent of LibreOffice/OpenOffice. As such, CrossOver supports Microsoft Office officially.

MacOS and Windows software bundles, save up to 90% off the normal retail price only at BundleHunt.
Full Review

Posted by twickline at 8:26 PM No comments:

I now have six licenses remaining to give to reviewers, if your interested to write a review about CodeWeavers CrossOver Mac or Linux this is your chance.

What will you receive for your review :

How can you contact me about doing a review :

You can leave a comment here, please include a link to your website, don't worry all comments here are moderated and won't be made public or go to Facebook and send me a message. Not the ( Contact Us ) but a Message, The Contact Us actually points to WineHQ Donate page...  :)

I would like to have a Spanish, Russian, Hindi, German, French and English or other major language Chinese or Italian etc etc :) review to broaden the overall reader base. This will not only make it easier for you to write the review in your native language but for your local readers to better understand the review.

Keep in mind license and reviews will be accepted on a first come first serve basis, I'm not trying to get the greatest reviews but more importantly truly honest and unbiased reviews.

MacOS and Windows software bundles, save up to 90% off the normal retail price only at BundleHunt.
Posted by twickline at 2:22 PM 2 comments:

I recently put up a new winehq.org Facebook page and with the help of Caron Wills from the Empire we have been posting Wine related news and links. We hope the page is a place for Wine related news, information and conversations. With that said we invite you to like and follow us on Facebook.

Posted by twickline at 8:16 PM No comments:

CodeWeavers Experiments with Oculus Support for Mac and Linux

CodeWeavers CrossOver now has support for the Oculus Rift! 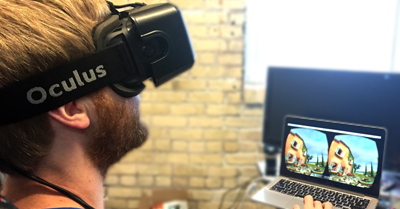 Well, our internal testing builds do, anyway. Here at CodeWeavers, we're excited about what virtual reality can bring to gaming and other computing applications. The Oculus Rift is currently the largest VR (Virtual Reality) headset available for purchase, so we've decided to integrate support for it into CrossOver.

Once we've released support in our public builds, playing Windows Oculus games with CrossOver on your Rift will be just as easy as with any native Mac OSX or Linux Oculus application. Integration between your Windows Oculus application and your hardware should be seamless. We've been "testing" ;) with a DK2 here in the office, and it's been an impressive experience.

Caveats? There's a couple. This is an experimental feature in CrossOver, and some games access the Rift hardware in a way that Wine doesn't yet support. We hope to have this repaired soon, but some particular applications may fail to detect the Rift hardware.

More worryingly, Oculus has decided to drop support for Linux and OSX. While our Oculus integration works for now, it does depend on your having a Linux or Mac OSX SDK, which is no longer supported by Oculus. Depending on changes to future Windows Oculus SDK versions, we could fail to support games built against those new SDKs.

But don't lose hope! It would be difficult, but we could build support for the Windows Oculus SDK in CrossOver. That's right: CrossOver could become the only way to use the Oculus Rift on Mac OSX and Linux. But this is all hypothetical. It depends on what Oculus decides to do for their Linux and Mac users.

If you've got a Rift and are interested in trying out our support, contact our Caron at caron@codeweavers.com and ask for a nightly build. If you want more information about our solution for Oculus, contact our sales team at sales@codeweavers.com. We'd love to have your support and feedback.

We're also interested in building support for other VR headsets. As soon as some other headsets come on the market, like Valve and HTC's Vive headset or Microsoft's HoloLens, we'll be thinking about adding support so you can have the freedom to use your Windows VR games and applications on Linux and OSX.

About Andrew Eikum
Andrew has been a Wine developer at CodeWeavers since 2009. He works on all parts of Wine, but specifically supports Wine's audio. He's also a developer on many of CodeWeavers's software ports.

About CodeWeavers
Founded in 1996 as a general software consultancy, CodeWeavers focuses on the development of Wine – the core technology found in all of its CrossOver products. The company's goal is to bring expanded market opportunities for Windows software developers by making it easier, faster and more painless to port Windows software to Mac OS and Linux. CodeWeavers is recognized as a leader in open-source Windows porting technology, and maintains development offices in Minnesota, the United Kingdom and elsewhere around the world. The company is privately held.

MacOS and Windows software bundles, save up to 90% off the normal retail price only at BundleHunt.
Posted by twickline at 7:58 PM No comments: