When I was researching scientific information for my novel, I found that my typical journal technique simply became a mess as I scratched out ideas that won't work and kept jotting ideas around the margins. I like neat notes and I like physically writing my ideas, but writing them quickly became a bigger mess than ever before.

That's what happens when you write a complicated, detail-necessary work! How do I get organized? How do I make it easy to find my ideas without a ton of Word files in my research folder? I'm still trying to find a good solution that works for me, and during this process, I've come across quite a few writing tools that sound interesting. The first one on the list:
StoryMill. 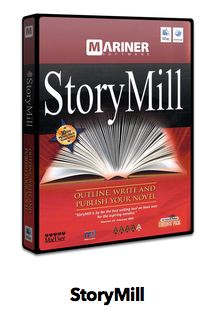 StoryMill is one of a few software packages by Mariner Software that work to help writers. While StoryMill is dedicated to various aspects of overall novel writing, Persona (character management) and Contour (story outline) are two other options that focus on specific areas of novel development. I'll be honest: Contour is not something I'll try because I am not the type of writer who outlines in any detail whatsoever. I have a general idea, pit stops along the way, and an endgame; however, my characters direct me better than any outline I've ever done. In other words, you won't see a review of it here because it won't be unbiased. With that being said, Persona is on my list because it has what I wished StoryMill did for characters: detail, detail, detail!

This is one of my problems with StoryMill. The most you have under the info block is what you see above: role, height, hair, race, weight, and eyes. You can add photos, tags, links, and blah blah blah, but the majority of your information is going to be typed in a blank word-like document. It's not very organized other than being under the name of the character. This is why I'll be testing out Persona for my characters; however, if I'm going to drop money on software ($40 a pop!), I don't want to have to buy something else I would think should be included.

It does have some simple planning features that make Contour unnecessary for many writers. The main screen for "Scenes" gives you a list of your scenes and the ability to pull up a timeline of your novel's scenes:

In each scene's page, you can write the scene, make notes, add photos, select the chapter, choose the characters in the scene, pick the location, and choose the date and time it starts and ends.


When going back and adding the information for my novel, the most helpful parts for me were the chapter, date, and time. I was able to get a timeline going and really think about the amount of time that was passing in each scene and how plausible certain things were in the scheme of that time frame. On the other hand, the timeline feature is only so helpful. Rather than stacking scenes chronologically for each date, everything falls in a line to scroll horizontally no matter how short of a time frame you select.

Notice above that the first time shows "The Ex....Dealing". This is because there are multiple scenes in that time period. It would be much more helpful if it was more of a calendar format where each day's scenes stacked in a straight line and then you could scroll right for the following days.

The locations option is helpful but still basic. You can add pictures, take notes, create tags, save links for files or websites, and see which scenes are related to the location. This is helpful for keeping together information for each location, but there's nothing special about it. The research tabs are similar. The only difference is that the "scenes" tab is missing. You can also create a list of tasks that you want to complete and use tags for them.

There are a lot of small features having to do with formatting, exporting, etc., but they are what you would expect from writing software. A few mop-up features of interest:


You can use any of these 4 coupons in Mariners online store and save between 5% and 25% off the retail price of new purchases or one of the 5 pack bundles.

Posted by twickline at 1:17 PM No comments:

We here at wine-staging are happy to announce an initial version of our Mac OS X >= 10.8 Wine builds. So far the packages have not yet received that much testing, so please give them a try, and report any issues you encounter.

The packages are available at: https://dl.winehq.org/wine-builds/macosx (Some mirrors don't show all files yet, just append random arguments to the url like ?whereismypackage to trick the cache)

For inexperienced users, it is recommended to install Wine using the *.pkg files. Just double-click on the package, and the usual Mac OS X installer wizard should open. As pointed out by Austin, I am not a registered Apple Developer and therefore the packages aren't signed. This will result in an error if you configured gate keeper to block unsigned packages. The installation itself should be self-explaining, so I will not go into too much detail here. It is possible to install the package either for all users (needs administrator privileges), or just for your current user. If you haven't installed XQuartz >= 2.7.7 yet (our package supports the x11drv as well as the macdrv), the installer will complain. Just install the missing dependency, and restart the installation, if this is the case.

After the installation is finished, you should find an entry "Wine Staging" or "Wine Devel" in your Launchpad. By clicking on it, a new Terminal window opens with a short introduction into some important wine commands. You can now directly start wine/winecfg/... from the Terminal, as the PATH variable is set correctly. For user convenience, the package also associates itself with all *.exe files, which means you can run windows executable s just by double-clicking on them. This might not work for all executable s though, since OS X doesn't seem to pass the current working directory to the "Open With" handler.

Some experienced users on the other hand might prefer a raw wine version without those gimmicks, so we also provide tarball archives. They basically contain the same files (except packaging related stuff), and can be unpacked in any directory. There is no need to set DYLD_* environment variables, all paths are relative, so it should work as long as the directory structure is preserved (you can skip the /usr prefix though using --strip-components 1). Also make sure to install XQuartz >= 2.7.7 in this case.

For those who are wondering, here a couple more technical aspects:

The following dependencies are shipped as precompiled *.dylib-libraries directly with Wine:

You can find all scripts and build files at https://github.com/wine-compholio/wine-packaging/tree/master/macosx Those files allow you to build the packages on Debian Jessie as host system, starting from a patched clang compiler (to support ms_hook_prologue), tools necessary to create OS X packages, cross compilation of the Wine build dependencies and finally cross compiles Wine itself. You only have to provide MacOSX10.8.sdk.tar.xz and xquartz-2.7.7.tar.xz, everything else is built from source. However, the generated scripts are meant to be run inside our build VMs, so realistically speaking it requires some effort to setup such a system and is not suitable for an average user.

There are also some features I am planning to implement in the future (depending on how much time I have):

There is no common system to provide automatic updates for packages besides the Store, so I think it would be good to come up with some solution for this problem. Especially if the user installed the package into his home directory, he could easily update it without entering a password. I don't have much knowledge about objective-c or cocoa, so if someone else wants to implement this, I am more then glad to add it as an optional feature to the installer.

So far Wine does not create desktop entries that are shown in Launchpad, but instead creates useless entries at ~/.local/share/applications/. I think it shouldn't be too hard to dynamically create a proper entry at ~/Applications/ using a wrapper like I did for the main wine executable.

This is basically something I could fix in 5 minutes, but I don't feel like paying 99$/year if I basically don't use Mac OS X myself.

The Wine Devel and Wine Staging packages can be installed in parallel. When started correctly (using Launchpad or the Dock), they will work no matter which other Wine versions are on the same system. Technically this is implemented by prepending the $PATH environment variable with the installation directory of our Wine version.

Please note that it is very important here that users use the Launcher, typing "wine" in a regular terminal will either not work, or run a Wine version installed via other sources like Macports/Fink/Homebrew. At least Homebrew installs to /usr/local, which means that "wine" typed in a regular terminal has a different meaning than "wine" typed in a terminal spawned by clicking on "Wine Devel" or "Wine Staging". Only in the second case, the WineHQ packages will be used.

In order to start WineHQ from a terminal without going through our Launcher, the user either has to:

* Prepend $PATH himself with the installation directory. For an installation into the home directory, the following command should work:

* Use the Mac OS X specific "open" command, which will search for the executable by program name.

The only (non-critical) "conflict" is that the Devel and Staging packages (and also Play On Mac) register themselves for .exe files. The first installed application is then the default application to open .exe files. But like on all other systems, you can do a right click on such a file and use the "Open With" menu entry to select the application you want to use. The user can also change the default application for the .exe extension, if they want to always use Wine Devel or Wine Staging.

The newest CodeWeavers coupon promo code is ( UNITY ) save 30% off CrossOver Mac or Linux today!
Posted by twickline at 10:06 AM 1 comment:

PlayOnLinux and PlayOnMac 4.2.10 have been released

PlayOnLinux and PlayOnMac 4.2.10 are now released. Here is the changelog:
Enjoy!

Posted by twickline at 9:10 AM No comments: