Some WINE with your Starcraft 2?

It finally happened. I have a Starcraft2 closed beta key! What feels like decades ago now I had applied for a Starcraft2 beta key on Battle.net and had all but given up hope after many months of waiting when a friend was kind enough to give me one of his invite passes. I entered the key into my account and was thoroughly excited when I saw the beta appear in my downloads. I was clicking through the website as quick as I could so I could get the game downloading, when reality came crashing down on top of me as I hit the downloads page and was asked to choose between a Windows and an OSX client.

What is a Linux user to do? With the recent release of Ubuntu 10.04 I had removed Windows 7 from my hardrive as it had not been booted into in over a month and was simply taking up storage space. My first thought was to simply reinstall Windows 7, giving it just enough space to boot and install Starcraft. Then I thought about the fact that I almost never reboot my system and that having to restart just to play Starcraft would be a real kill joy (and a time waster).

I run all of my source engine games on Linux via CXGames however upon looking at their entry for Starcraft II I had little faith that it would work under Crossover. Not quite ready to give up hope yet I headed over to the WINE AppDB entry for SC2, lo-and-behold it had a gold rating! Browsing through the page you will find a wonderful HOWTO for recompiling WINE from git with a custom patch for SC2. Always one to jump in with both feet first I promptly uninstalled my current WINE version from my system and began downloading/compiling a patch version of 1.1.43 Twenty minutes later (I have a fairly good processor) I had the patched version of WINE built and installed. I then proceeded to download the beta client and get it installing under WINE 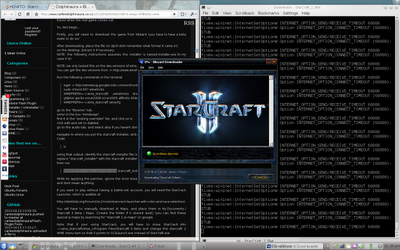 (I also followed the directions here that contains some extra tweaks for running the beta under WINE, it also installs SC2 to it's own WINE prefix).

Posted by twickline at 1:54 AM